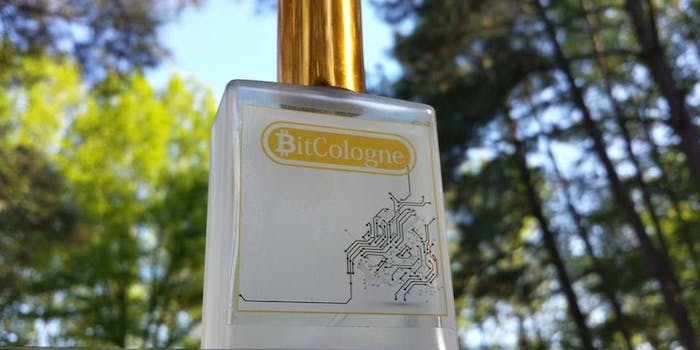 Bitcoin cologne is now a thing for some reason

Because no woman can resist a man who smells like Internet.

It is a universally acknowledged fact that a single man in possession of a Bitcoin fortune must be in want of Bitcoin-branded luxury products on which to blow his semi-pretend Internet money.

Sure, any eligible Bitcoin mining bachelor can unload his virtual currency on a Tesla roadster or a trip into outer space. But what about something that will really make him more attractive to the ladies?

Enter Bitcologne, the first cryptocurrency-themed cologne ?made for peer-to-peer interaction.”

Bitcologne was created by the Virginia-based eco-products company Eruditium, which was big on accepting Bitcoin even before coming out with the fragrance.

Naturally, the people behind Bitcologne accept Bitcoin, but they also take government-based currency via Paypal. The going price is about 0.0608 Bitcoin or $26.

What does a Bitcoin cologne smell like, you ask? A musky combination of Cheetos, Mountain Dew, and the faint odor of two dozen graphics cards whirring in unison? Hardly. According to the cologne’s manufacturers, ?It’s an aromatic blend of spicy, floral, oak and citrus notes your ‘partner’ may find it hard to resist initiating a more ?private transaction.’”

It’s like a soft blend of bergamot, citrus notes (I’m thinking lemon or something) and an array of different floral notes. I’d say there’s a hint of cedar in it too, but it’s faint. It blends well together, so it’s not overpowering and doesn’t come off as feminine. It kind of reminds me of Giorgio Armani.

However, another customer’s review captured what was the likely overall goal of the project—to give Bitcoin aficionados an opportunity to throw money at anything that panders to their interest in cryptocurrencies:

My husband and I are in love with Bitcoin, so when I stumbled across this site I had to try this bitcoin scented cologne.

Although, the question remains: what would a Dogecoin cologne smell like? Probably a combination of wet shiba inu and rocket fuel. Maybe just stick to Bitcologne for the time being.