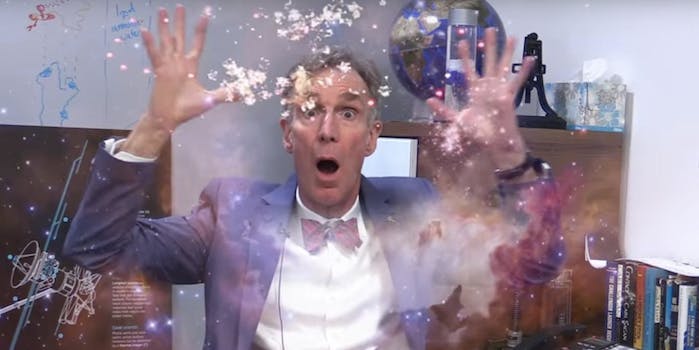 Your mind will be blown.

Just when you think Bill Nye can’t get any cooler, he surprises you. This time around, Nye has blessed us with the perfect reaction GIFs for almost any situation on the Internet—and all of the GIFs star Nye himself.

Everyone’s favorite scientist posted the GIFs to Imgur, offering them up for the denizens of the Web to use. Sometimes you want to let someone know that you’re laughing out loud, or that your mind is totally blown. Dump the dated “LOL” text reaction and forget that image of Jackie Chan with his hands above his head; Nye has you covered with some fresh content.

He even has reaction GIFs for science lovers, such as when you’re waiting for that chemical reaction to happen.

But good ole’ Bill didn’t make these GIFs completely out of the goodness of his heart. He’s asking that you consider joining the Planetary Society, an organization dedicated to the advancement of space science and exploration.

Cruising through the cosmos and dropping Bill Nye reaction GIFs? Sounds like a pretty good deal. You can also check out the video that the GIFs come from, in which Nye suggests that you “steal them, repost them, modify them, have fun!”

This isn’t the first time that the dashing science man has caught the Internet’s (and Imgur’s) attention. Just a few months ago, he starred in some of the dankest, grittiest memes around, created from photos of him raising awareness of climate change.