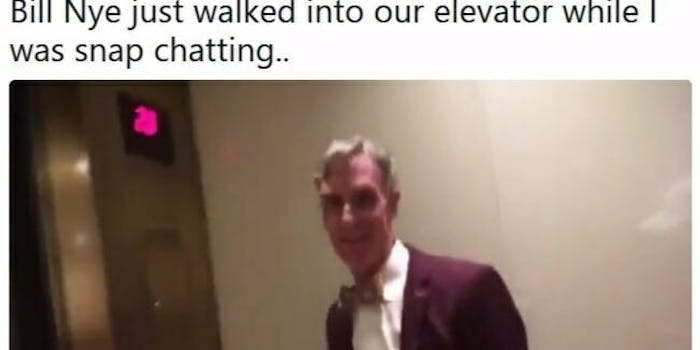 Bill Nye walked into a Las Vegas elevator, and it was filled with half-naked Snapchatting women

That headline is not the beginning of a joke.

It happens to the best of us. We’re with a bunch of our friends in a Las Vegas hotel elevator, and we’re just dancing our asses off as we move between floors. Suddenly, the door opens, and in walks one of the most respected kid-friendly TV scientists of all time.

That’s what happened when @Savmasta and a bunch of her pals were posing and Snapchatting in the elevator on Friday. And then Bill Nye strolled in to the pandemonium.

Bill Nye just walked into our elevator while I was snap chatting.. pic.twitter.com/LwCOITAEft

According to the IB Times, Savanah Prosch and her friends were heading to the pool when the Science Guy interrupted their posing. Prosch told Storyful that Nye was “super nice and polite,” said hello, and offered to take photos.

But she said he “wasn’t expecting to see a bunch of girls try to pretend like they weren’t just doing something he definitely saw.”

Naturally, the embarrassment was real.