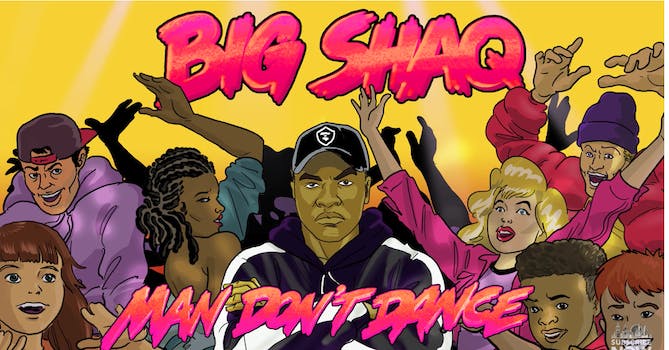 Will this be the song of the summer?

Your favorite Twitter rapper/comedian is back with a new single just in time for the summer. Following the viral sensation “Man’s Not Hot,” Big Shaq has released his second single, “Man Don’t Dance.” Listen below:

While “Man’s Not Hot” was about Big Shaq never wanting to take off his jacket because he’s not hot (ever), “Man Don’t Dance” is about him—you guessed it—refusing to dance.

If you’ve been off the grid and don’t know who Big Shaq is, it’s time to get hip. In the fall of 2017, Big Shaq, whose real name is Michael Dapaah, released a video for “Man’s Not Hot,” which has amassed more than 200 million views on YouTube. The video, which was made shortly after a clip of Dapaah performing a freestyle rap on a BBC radio show went viral, skyrocketed the rapper’s popularity across the globe. The song was an official single and released on streaming platforms worldwide.

It was easy to see why everyone loved “Man’s Not Hot.” The lyrics are funny and catchy. The line “The ting goes skrrrr ..” left people figuring out how to spell out the made-up words.

If you play Man's Not Hot by Big Shaq at exactly 11:58:14 on December 31st you’ll hear “The ting goes skrrrahh, pap, pap, ka-ka-ka skidiki-pap-pap and a pu-pu-pudrrrr-boom skya, dudu-kuku-dundun; poom, poom, you don' know” as the clock strikes midnight. Enter 2018 the right way.

So far, it seems like Big Shaq’s fans are digging his new song.

So, now we know that Big Shaq doesn’t get hot and doesn’t dance. What else does he dislike? We’ll have to wait for the next single to find out.