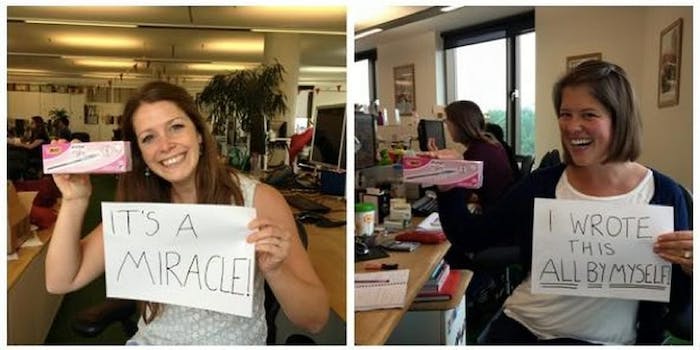 People have been mocking these for years.

In 2011, a Jezebel article introduced the Internet to the Hindenburg of marketing that is Bic for Her, a just-for-gals pen brand that was roundly and rightly mocked for condescending to women. After the drubbing Bic took for the pastel-hued pens, you’d think they would have discontinued or renamed Bic for Her. Haha, nope! Guess what a group of women just received as an office present for International Women’s Day 2016?

We've been sent some 'BIC for her' pens to celebrate #InternationalWomensDay. Revolutionary https://t.co/3g37jv0Gyr pic.twitter.com/WphpRtJI7i

The ladies (and lone dude) of U.K. beverage brand Innocent Drinks mocked the “revolutionary” gift and linked to the Amazon reviews for Bic for Her, which are mostly cutting and sarcastic. The Facebook and Twitter comments on Innocent’s post were equally devastating.

After five years of scathing social media criticism, these things must still be selling like hotcakes, because the company has been very persistent in its gender essentialism. Just last year, they had to apologize for a Women’s Day ad that encouraged women to “think like a man.” Could Bic for Her be any more tone-deaf? How did this come about? One good theory, put forth by a marketing commentator back when the pens first became controversial, is that the executives who approved this branding were not women, and that women might not have been meaningfully included in the process at all.

That explains the original mistake, but it doesn’t explain how this product is still alive after half a decade. The only explanation I can think of is that, in between the periodic firestorms, someone’s buying a lot of these pens.

Back in 2012, a Bic spokeswoman suggested that might be the case:

“BIC Pens ‘for Her’ are a style-led product and have proved to be very popular since their launch at the end of last year,” she said. “It is great to see people having fun with the product and we’re delighted to have brought a bit of much needed glamour to stationery cupboards everywhere.”