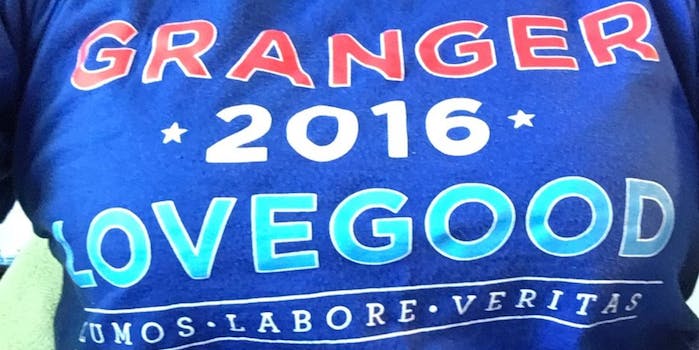 Now that campaigns for the general election are in full swing, social media is rife with political conflict. What are you to do when scrolling through your once-friendly feeds gets too darn depressing?

Replace your disillusionment with some good old fashioned escapism.

Twitter users fantasized about #BetterFictionalCandidates on Thursday. And we have to admit, some of these picks seem promising.

Potterheads donned merch in support of their ideal ticket. Though for some reason they failed to use the obvious and perfect hashtag: #ImWithHermione.

I did not know #BetterFictionalCandidates would be a thing this morning when I got dressed. (Tee via @TheHPAlliance) pic.twitter.com/VKpo7nhhEn

Disney fans selected the most courageous leader they could think of.

We have to admit, she does seem qualified.

And hey, bro, if a female president isn’t your jam, there’s always the very patriotic choice of bacon-lover Ron Swanson.

If going green is your thing, we think Ms. Frizzle might have some great ideas for reversing global warming.

One Twitter user even made a very compelling argument for the Kool-Aid Man.

OK, we can’t stay in fantasy land forever. There is a real election happening. But, dammit, we’d love to #MakeAmericaGrootAgain.

#BetterFictionalCandidates. "I am Groot" will always be the truth. pic.twitter.com/NsuK6vrtTM