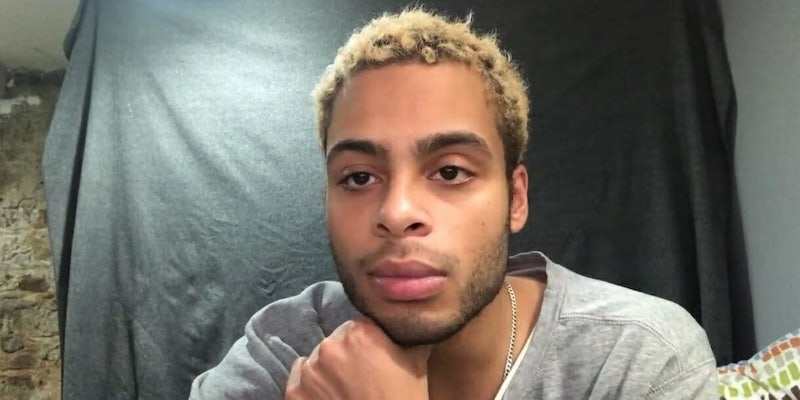 Twitter user @Jovanforever says he wants to ‘f*ck up every white life I can.’

Jovan Hill has been called a “digital beggar,” and as the New York Times reported last December, he asks his loyal online followers to “donate to the Jovan charity” so he can pay his $1,300 monthly rent and keep up his marijuana habit while remaining unemployed.

But he had his Twitter account suspended last week after posting a fake photo of popular beauty vlogger James Charles using the N-word. Now, Hill is back on Twitter with a different account, and he said he’s trying to expose white YouTubers who have used racist or other problematic language. Or, in his own words, he wants to “fuck up every white life I can.”

Last week, Hill posted a fake Instagram direct message from Charles. Then, Charles responded on Twitter by threatening to sue Hill, writing, “This is absolutely not funny. Delete this immediately, or my lawyer will be in contact.”

While Dawson was apologizing on Sunday night for an old joke he told about ejaculating on his cat, Hill targeted him for his liberal use of blackface in the past and for sexualizing his pets.

Hill also turned his attention to David Dobrik and Tana Mongeau, who have more than 11.5 million and 3.8 million YouTube subscribers, respectively. Dobrik previously on Twitter had called people “sluts” and used racist language.

Hill retweeted this into his timeline, as well.

As for Mongeau, Hill tweeted video of her saying the N-word.

YouTuber Noel Miller, who has nearly one million subscribers, also got Hill’s attention with old transphobic tweets and a video in which Miller applauded Dave Chappelle’s transphobic humor.

Evidently, Hill is content to cause as much chaos as possible, writing on Twitter, “If you stan Emma Chamberlain, James Charles, Shane Dawson, Jeffree Star, Cody Ko, Noel Miller, or Tana, you are a racist and a transphobe and proud of it.”