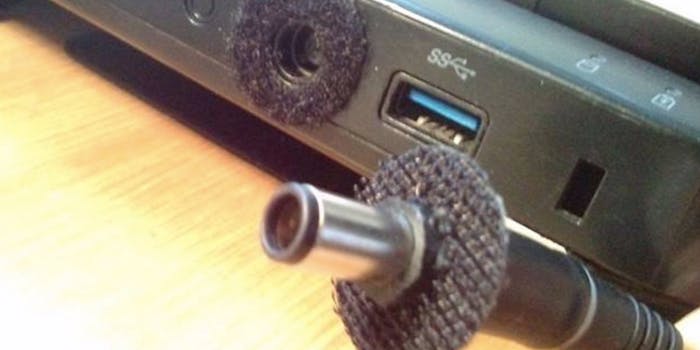 Welcome back to an irregular series at the Daily Dot where we look at the top-upvoted posts on some of Reddit’s more specific communities. The Internet is amazing for its diversity, and the “random subreddit” button is a constant confirmation of that.

Today we’re looking at r/techsupportmacgyver, a place where computer programmers show off the unique, mostly hilarious solutions they’ve come up with for the tech annoyances we deal with every day. It’ll actually give you some ideas next time you need to get a VGA cable into your bathroom or whatever (we’ve all been there, right? OK). I like subreddits that serve up usefulness and uselessness in equal measure, and techsupportmacgyver hits that mark perfectly. Here, I’ll show you.

At 3,759 upvotes, what should really be a standard feature:

Seriously, how are not all laptops chargers designed like this? This is brilliant. I feel like we as a society deeply underestimate how much Velcro can improve our daily lives.

I mean, yeah, you could probably just Google your way into an answer—which would take a helluva lot less time than making your own artisanal pencil rubbing—but at least this way your superiority isn’t in question.

At 2358 upvotes, I can’t believe this actually worked:

And, to be honest, I still don’t believe it actually did. I feel like this is wishful thinking and the guy took a picture because, hey, it sure would be awesome if cool-dude lego man came to the rescue. No disrespect though, get that karma wherever it comes.

This might come in handy for any and all grandpas and also me.

At 1,205 upvotes, the human centipede of VGA adapters:

So so far we’ve seen a lot of people making ingenious use of everyday items to solve befuddling tech problems. But now we have this man who’s hanging his coats from old keyboards. One, that doesn’t seem like an efficient way to solve a problem, and two, dude, go buy more coat hangers, at Target or somewhere, what is actually wrong with you. I could not be less proud of your accomplishment.

At 1,508 upvotes, the world’s most tenacious programmer:

This looks like it sucks so much. If I found myself programming on a ravioli-sized screen I would quit computers forever and transition into journalism or something.

Look man, I’m not trying to be mean, but when you find yourself fixing your Xbox controller with a weird rubber band network, that might be a sign your parents can’t afford to buy you video games in the first place.

I don’t know what to say—it’s beautiful. The flaccid, sky-blue office shirt, the cloth shorts, the dad-Converse, the complete lack of Game of Thrones-ness about it… this might be my favorite Reddit post of all time.