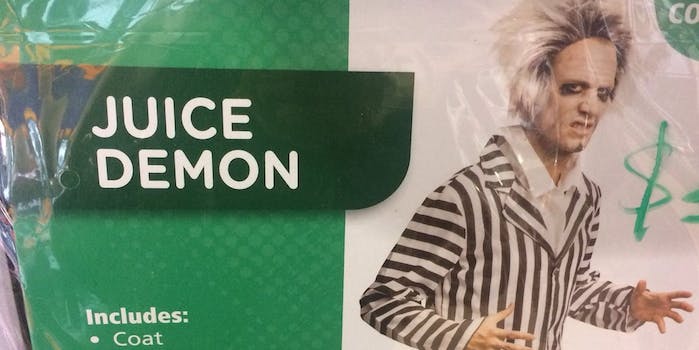 Sure, you have big plans to make a DIY Ghostbusters costume with a working proton pack for Halloween this year. But before you know it, that big party will be upon you, and you’ll have no choice but to run to the dollar store for some affordable piece of polyester to wear.

Aside from the lie that “one size fits most,” there’s always something… off about these plastic-bagged costumes, isn’t there? Something I just can’t put my finger on.

Juice Demon and Tea Lizard would be a good couples costume pic.twitter.com/9BZuVxeuwt

Oh, right—it’s that the manufacturers never have the rights to the characters they’re profiting from, so they have to make their getups juuuuust different enough, in name and style, to avoid legal consequence. But still recognizable as the thing they’re ripping off.

Knock off Halloween costumes are the best part of the Halloween season pic.twitter.com/GIy2SYaMIc

Get it? Because he’s… from space? Or crammed in that too-tight costume? Or something?

Man, the hours I spend as a kid playing Sidekick Bros. on my Nantantord video game system! You have no idea. Or wait, am I thinking of Video Game Guy? Always getting them confused.

These all seem geared toward guys, but never fear: There’s also stuff for the ladies! For example:

Ah yes, the hit ’90s comedy that was definitely called that. Who could forget it? Not you, Halloween consumer.

@mega64 can't wait to see what the generic joker costume comes with. pic.twitter.com/LNHrXw68Hc

I’m only 50 percent sure this derives from the flop Kill Yourself Krew superhero movie, but I’m sure it’ll read. Especially if you get your friend to go as her companion…

GREEN VILLAIN. The scariest bad guy of all. But maybe fear and frights aren’t really your thing. In which case, may I present…

This costume is your entry to a world of imagination. Just don’t imagine anything too specific or you might get sued.

Anyway, we’re bound to see plenty more shitty costumes like these in the month ahead, so we’ll update this post as we see them. Wouldn’t want you to buy anything less than the best.