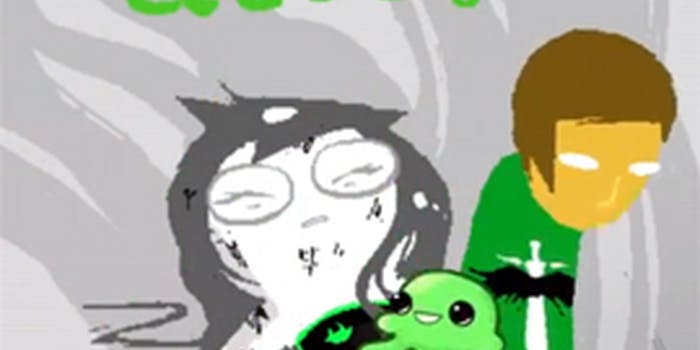 The 5 best Homestuck songs on the Internet

The fan community around Andrew Hussie's sprawling, massively-popular webcomic, Homestuck, has produced some amazing songs (and videos to go with them). Here are the best.

Filking is the pastime of writing songs, or “filks,” about geek culture, and in some cases changing the lyrics of other songs to fit the situation. The practice is familiar, but in the age of the YouTube generation, it’s frequently paired with skilled video editing to create fantastic songvids.

Combine both of those things with Andrew Hussie’s massively popular, massively epic flash webcomic Homestuck, and you get wondrous results, as we discovered over the weekend, when Reddit user Slightschizo posted what they felt were the best Homestuck songs from around the internet.

Here are our 5 favorites from their list, plus 2 more staples of Homestuck fandom:

1) “You Can’t Fight the Homestuck”

This dazzling songvid comes closer than anything we’ve seen to encapsulate the sheer epicness of Homestuck in its many layers, vast array of characters, and endless in-jokes.

Tumblr user phemiec has been giving the world fabulous Homestuck fanart and well-written filks for a while now, exploring many of the characters and relationships of the universe.  Our favorite is “Finally I’ve Flown,” a poignant look at a character, Tavros, who’s struggling to deal with *spoiler alert* a recent attack that’s left him unable to walk. Even if you’re not familiar with Tavros’ storyline, it’s difficult not to be moved by lyrics like these:

I’m a hero in a land of treasure
A failure in a body that’s all wrong,
I’ve tried to measure up to this adventure
To fantasize and make believe I’m strong

The first minute and a half of this hilarious songvid follows creator Hussie (who is also a character in the game) through various backdrops from the game itself. Things really pick up at 1:22, when the jaunty background vocals walk you through the gruesome deaths of the series’ main protagonists. (Spoiler alert: in Homestuck, everyone dies, often repeatedly.) When you hit the rap, expect laughs:

It’s a good week if I can squeeze in a shower,
‘cause you people cry if I don’t update every few hours

The thing about shipping Homestuck characters (rooting for them to get together romantically) is that it’s a bitter endeavor. Even if they manage to make it out alive, and don’t wind up becoming their own grandparents (don’t ask), there’s still the complicated issue of love itself. Let’s just say in Homestuck, love is very complicated, in a way that’s designed to appeal to the angst-ridden teen in all of us. This song celebrates the messy edges of Homestuck shipping, and fandom shipping in general. And the fanart’s pretty, too.

This amazing animated filk contains major spoilers for Act 6 of Homestuck, but even to the uninitiated, this is a production number so stylish it’s hard not to enjoy.

Bonus: “I Don’t Know What Homestuck Is,” for all of us who are totally confused by Homestuck, whether we’re actually following the series or not.