10 easy pranks that will make you an office legend

We spend so much time with our coworkers, it’s only natural to occasionally want to prank them. We all need something sometimes to break up our days and bring a little smile (and some frustration) to those we share an office with.

We’ve searched the internet and collected some of our favorite real-life pranks, with an emphasis on the ones you can pull off without too much effort. It’s a job, after all: You’re not supposed to work that hard.

Now the next time your coworker goes on vacation, make sure he comes back to a fun little surprise—and a reminder that he should never get too comfy on the job.

1) Air horn under the chair

This one is as easy and timeless as it sounds.

Step one: Tape an air horn under coworker’s chair.

Step two: Wait for them to sit down.

Step four: What did you say?? No, I can’t hear you, we put an air horn under Dave’s chair.

2) Fish tank in a desk drawer

Poor Brian returned from vacation to his office to find a garbage bag filled with water, goldfish, and fish tank decorations where his files should’ve been. Good luck cleaning that up without ending up all wet.

3) Everything is Internet Explorer now 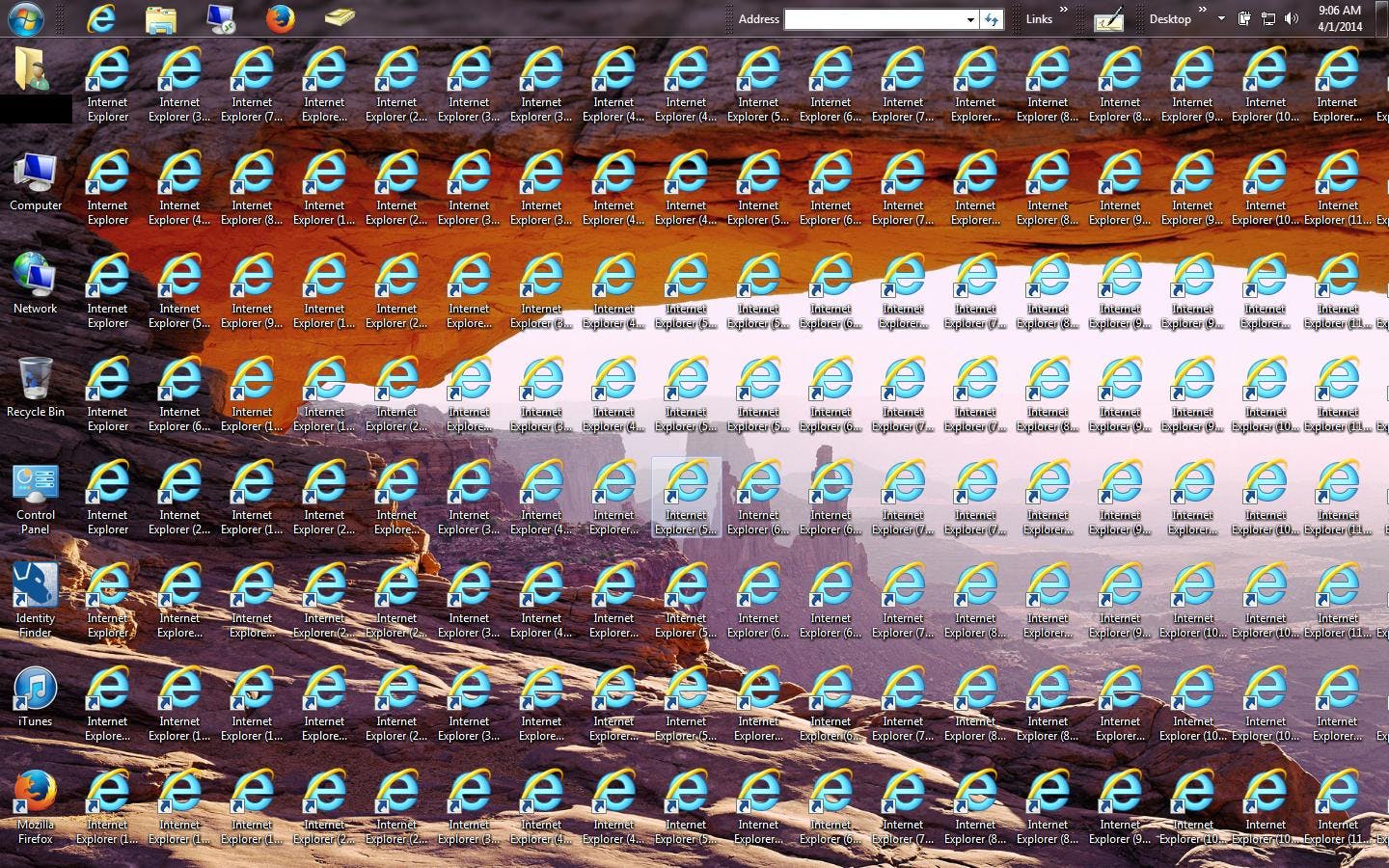 Some pranks are all in good fun, but this one is just cruel. No one should have to endure a browser that poorly designed, no matter how much they might deserve it by foolishly leaving their work computer unattended.

It’s easy to imagine some of our less technologically inclined coworkers spending 20 minutes yelling at the copy machine before realizing something’s amiss. Hope somebody tells Elaine it’s just a joke before a blood vessel bursts.

Working at a credit union doesn’t seem like it would be that exciting, but when your CEO decides to get in on the “creepy clown” craze by putting on a scary mask and jumping out at employees, it’s time to start wondering about updating your LinkedIn profile.

It’s one thing to rickroll someone, a prank that was definitely more effective five years ago, but it’s an entirely different and more admirable prank when you rickroll a coworker’s entire cubicle. This prank is something will never give up or let you down. 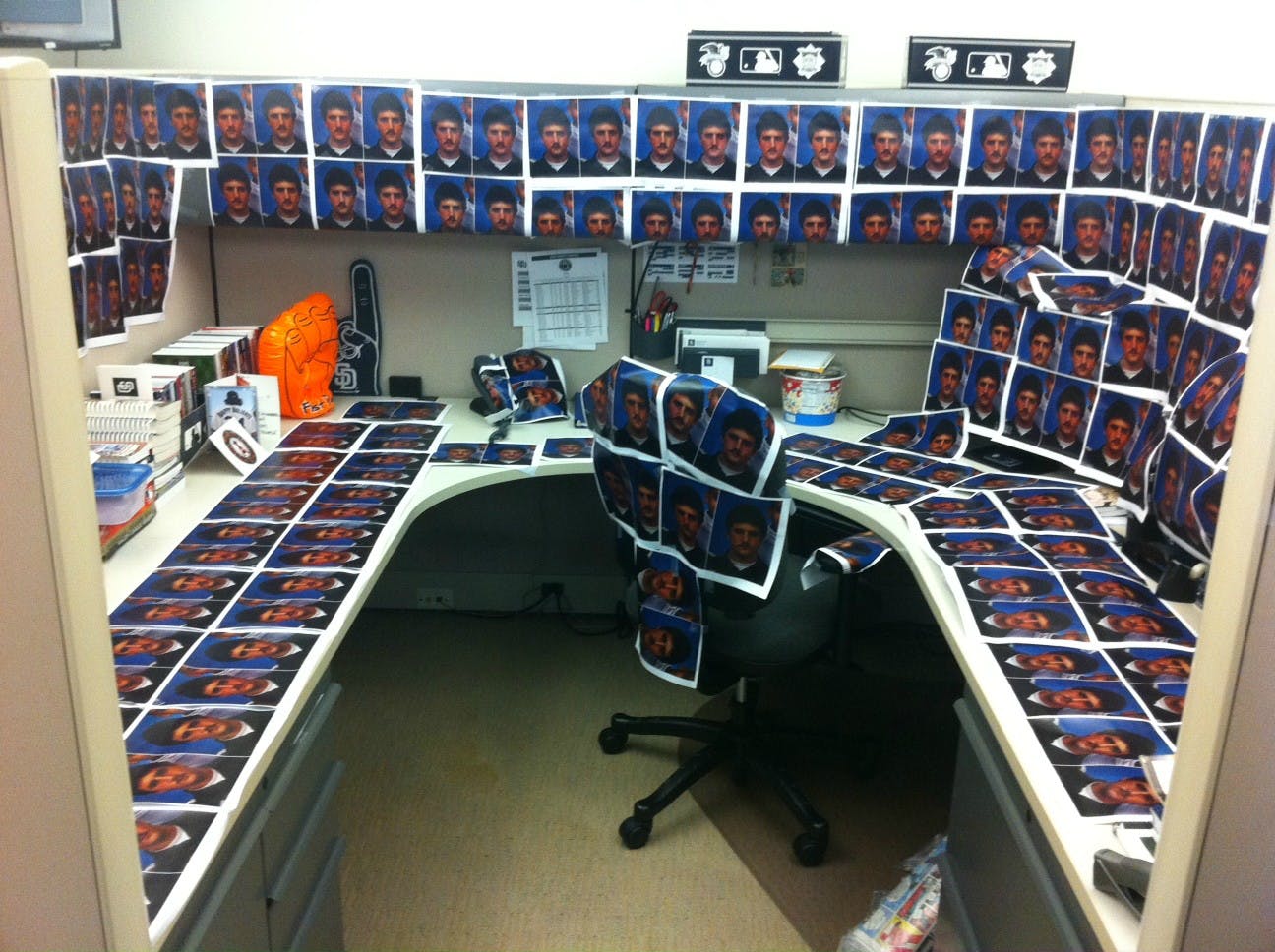 As if Rick Astley’s face weren’t enough to cause embarrassment, imagine your desk covered in your own your middle school yearbook photo! That’s exactly what these coworkers did to their unsuspecting victim, which hopefully led to a big laugh and not a whole flood of cringey middle school memories. Maybe a little of both.

My last act as @HonestTea's social media manager = hiding ALL my business cards throughout the office. #officeprank pic.twitter.com/50LyQY37rF

Make sure they never forget you by hiding your business cards everywhere. Years after you finish working at that job, people will still be finding business cards in strange drawers and crevices, asking, “Wait, who the hell is this guy and why does his business card keep stalking me?” 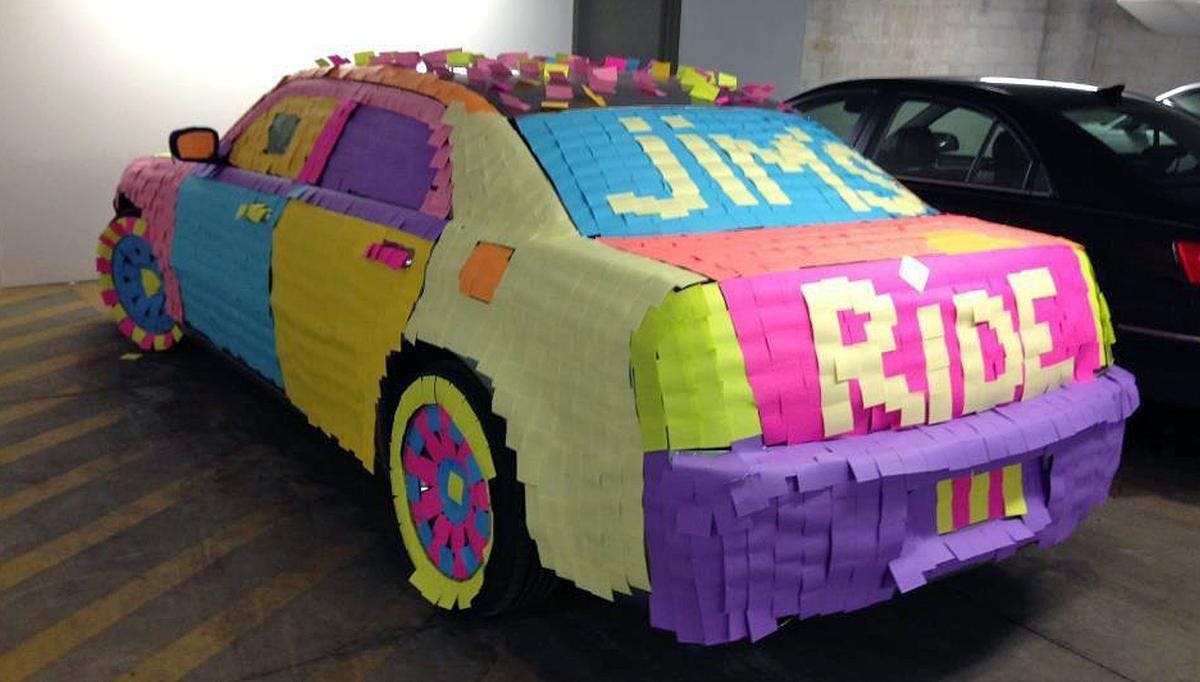 We like this prank because it’s ambitious but easily achievable, as long as you don’t mind wasting an insane amount of sticky notes. The design and attention to detail are admirable; each section is a different color. Hopefully, Jim took all these off his car before he drove off.

This Instagram user says she glitter-bombed her entire office, so we can only imagine what her coworkers did to deserve such punishment. We recommend caution with this prank, because while your coworkers might laugh in surprise for a moment, they will curse your name every time they find yet another shiny sticky little piece of paper appear somewhere. Have you ever tried cleaning up glitter? I’m no Neil DeGrasse Tyson, but I’m pretty sure it’s scientifically impossible.