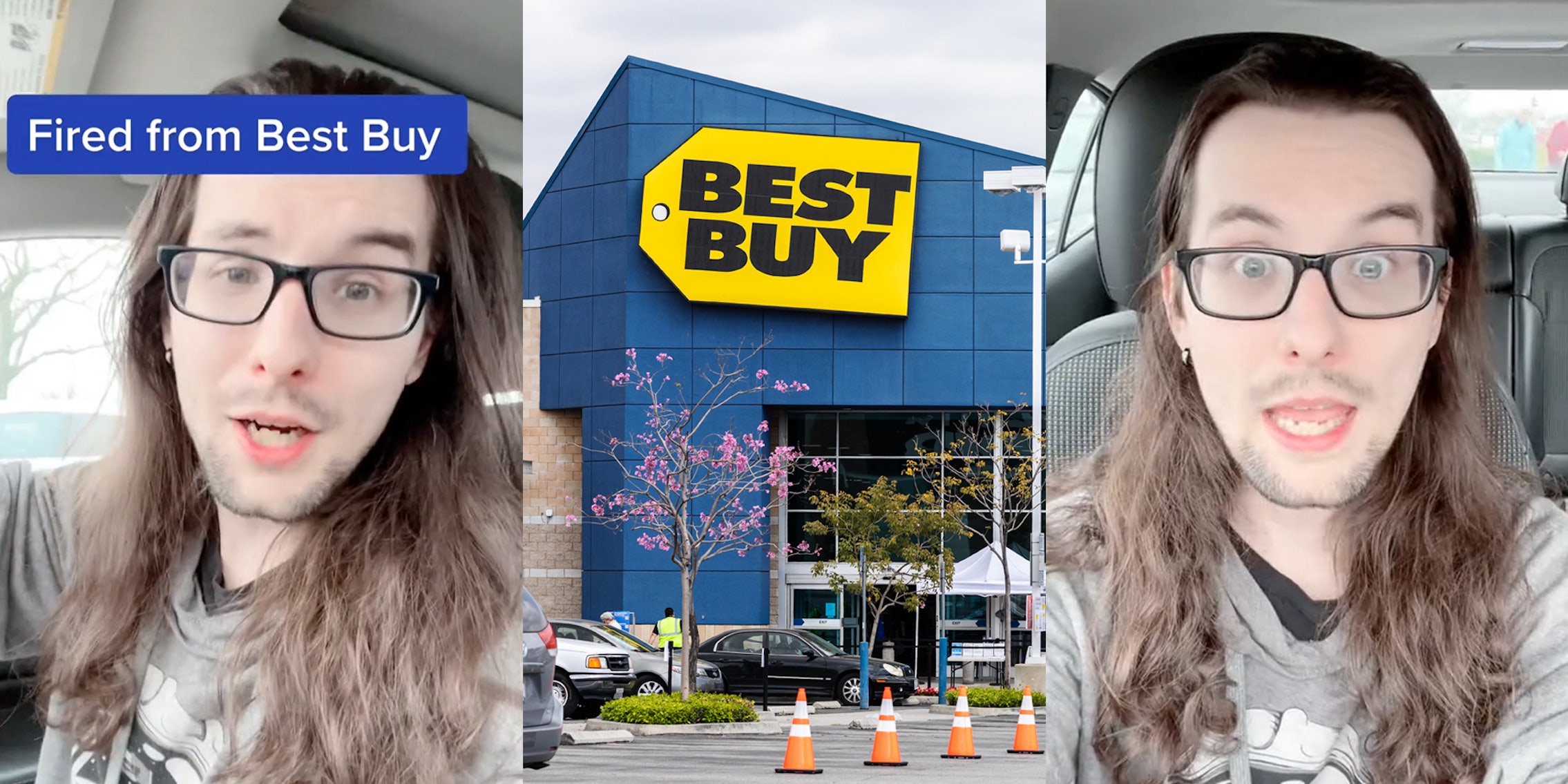 ‘Don’t work your two weeks’: Best Buy employee says manager fired him for using PTO after saying he got a new job

Twitch streamer and TikToker Tyler Johnson (@crushinggames) went viral this week after stating that he was fired from Best Buy shortly after putting in his two-weeks notice.

The TikToker said that his initial interaction with his boss was a pleasant one and he thought he was leaving the job on good terms. He mentioned that he had about three weeks left of paid overtime with the company and he decided to use a day of it following one of his scheduled days off.

Tyler believes he was fired for utilizing his PTO, even though his boss gave him an entirely different reason for his termination.

Tyler says in the clip, “I got fired from Best Buy for using PTO.”

The camera then cuts from the TikToker’s face to show the Best Buy location he said terminated him, just because he elected to use some paid time off after giving his two-weeks notice for another job.

“That store right there Best Buy yeah, yeah they fired me,” he continued. “To give you some back story, let’s go. So after a little bit of over a year of promising I would get a manager spot and getting passed up twice … I started looking for another job … got accepted and got a manager role at another company. Getting a lot more money and what I want to do.”

Tyler said he then went to his boss to inform him, as it was the right thing to do.

“So doing the professional thing that everyone should do, I went in and talked to my boss and said, ‘hey I’m giving my two weeks, thank you for this opportunity, thank you for building everything up and it was great working here,'” he said. “Seemed OK with it, it was awesome, he shook my hand and said, ‘Cool, don’t burn your bridges, I like that you did that and maybe we’ll cross paths in the future.'”

Tyler then cuts to him looking directly into the camera and said he’d already had scheduled time off to go to GalaxyCon. When he returned, he decided to take another day off, as he was exhausted.

“With being exhausted and everything I decided to take some PTO the next day I was scheduled. They did not like that at all. Instead, my boss texts me, ‘Hey just giving you a heads up, you don’t work your two weeks, you were actually fired the day you told me about you leaving.'”

The TikToker said he was taken aback by the news.

“I’m sitting here going, ‘I still have three weeks of PTO left, I was still going to work for you, what’s going on?’ No response until I return the keys that I had because I was supposed to be ‘leadership’ to the store. And he confronted me out in the parking lot saying, ‘Why’d you lie? We had a good thing going on?’ He said some wild accusations that I told people they were going to get fired and were not true. It saddens me that this happened but yeah it did. So moral of the story, use all of your PTO, don’t say you’re leaving until you’re about to leave. Because they will fire you for any reason.”

Users on the platform who saw Tyler’s piece shared their exasperation. Some recommended that if his two-weeks notice was documented, he could possibly sue for workplace retaliation.

Others said that, legally, Best Buy would have to pay out all of his paid time off even if he quits or was fired as he might be entitled to those hours as part of his hiring agreement. However, those laws vary by state. For example, in New Jersey, employers are not required to pay out the rest of a worker’s PTO if they are fired or quit. Paycor has uploaded a complete list of states that require PTO payouts for employees.

Some used Tyler’s story as an example of why letting your employer know that you’re leaving is never a good idea. Others said this behavior was typical of managers at Best Buy.

“Best Buy managers only come in 2 flavors, competent and ‘whoever promoted you should be fired too.’ There’s no middle ground,” said one person.

There were some people who said they were told they couldn’t use their PTO time once they’d given two-weeks notice.

“Typically can’t use pto after turning in your 2 weeks. It was something HR mentioned to me at both places I left,” wrote a commenter. “Most jobs aren’t going to accept PTO use once you put your two weeks in,” another added.

And then there were some who said that the real root of the problem was the fact that he decided to take a day off at the last minute after he had already had a scheduled day off.

The Daily Dot has reached out to Tyler via Instagram DM and Best Buy via email for further comment.