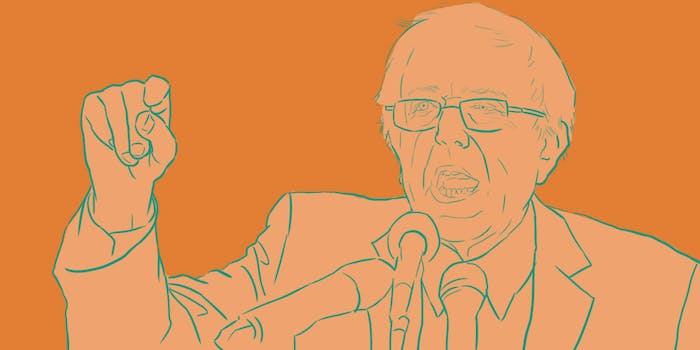 Sanders has been championing his policy on Twitter—even while critics attack it as 'too expensive.'

The front page of a recent edition of Wall Street Journal featured an article claiming that presidential hopeful Sen. Bernie Sanders (I-Vt.) wants to increase federal government spending by $18 trillion over the next 10 years—an increase of about one-third over that time period. This was apparently supposed to raise some kind of alarm (what kind of maniac is this?) and I’m sure both Republicans and fellow contender Hillary Clinton are happy the Journal is doing their work for them.

Savings for businesses under a Medicare-for-all program would be astronomical. U.S. companies would finally be on equal footing with Europe.

Medicare-for-all system would actually save all of us $10 trillion over 10 years http://t.co/W8aQSRuGye

The problem is that a spending figure, even one as big as $18 trillion, is meaningless on its own.

Most of that money—$15 trillion—is the expansion of Medicare to cover all Americans. Yes, that’s a lot of money. But we are already spending a ton of money on health care—with embarrassingly poor results. In 2013, total premiums for private health insurance cost Americans $962 billion, individuals and families paid $339 billion out of their own pockets and “other private revenues” accounted for another $121 billion of health care costs. That’s $1.4 trillion of health care spending, paid for by families and businesses, most of which would be replaced by Sanders’ plan. Project that out for 10 years, add health care inflation, and you’re talking about a lot more than $15 trillion.

The government is just a device that we use to provide certain services that are better handled collectively than individually. If the government can provide equivalent service at lower prices, then the gross dollar amount involved doesn’t matter.

What matters is the amount of money that the American people spend for health care.

I’m pretty sure—and I’m speaking partly from personal experience—that most businesses would be happy to have the federal government take the health care headache off of their hands once and for all. Rising health care premiums are a major reason why companies find it hard to give their employees generous raises. This is a real problem for, say, profitable technology companies (Apple, Google, etc.) who have to compete with unprofitable startups who can offer big raises without worrying about the bottom line.

Many people would be happy to stop paying private insurance premiums (either in the individual market, or the employee contributions in the employer-sponsored market) and instead pay a higher payroll tax to support expanded Medicare. Many people would also be happy separating health insurance from their work status permanently. Some other people would prefer the current system—primarily rich people whose payroll taxes would exceed their current insurance premiums. That’s a distributional issue, and it comes down to whether we want a policy that favors rich people or one that favors poor people.

As is well known, we spend a lot more money and have comparable or worse aggregate health outcomes.

Now the big issue, I admit, is whether the government can provide equivalent service at lower prices. For the vast majority of consumer goods and services, it can’t. That’s why we buy our phones and computers from private companies like Apple, not from government agencies.

The usual argument against a federal health insurance program is a blind assertion that the government can never provide services that rival the private sector. That’s what you learn in Economics 101; therefore, it must be true. But real economists have known for more than half a century that health care doesn’t behave like ordinary consumer goods. The paper that everyone still cites is by Kenneth Arrow—he of the Arrow-Debreu Theorem, which is perhaps the most extreme theoretical statement of the powers of markets to achieve efficient outcomes in equilibrium.

If you don’t want to read economics papers, the best evidence that health care is different comes from comparing the United States to other rich countries, which all have something closer to a single payer model for health insurance.

As is well-known, we spend a lot more money and have comparable or worse aggregate health outcomes. There is a huge ongoing debate about why this is, which I’m not going to try to settle here.

The main point, however, is that if you want to argue against the Bernie Sanders health care plan, you have to make the case that Medicare for all will actually produce worse outcomes or higher costs than our current system. The fact that it costs a lot of money is beside the point.

This article was originally featured on Medium and was reposted with permission.

James Kwak is an associate professor at the University of Connecticut School of Law, the co-author of 13 Bankers and White House Burning, and a co-founder of Guidewire Software. Read more from James on Medium.