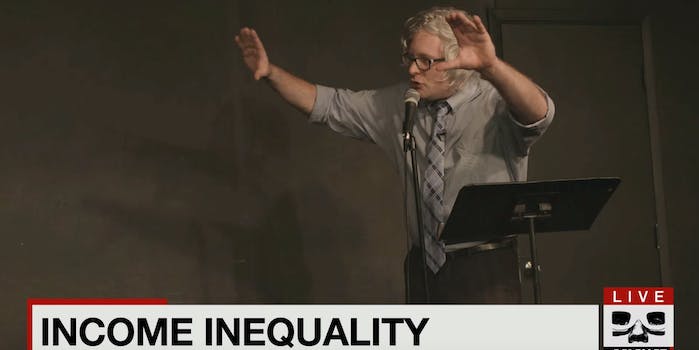 Watch 'Sanders' and 'Trump' duke it out—and form a bond.

Larry David undoubtedly shone as Bernie Sanders impression on Saturday Night Live, but there’s another comedian who does it even better: James Adomian.

I first saw Adomian whip out his Sanders impression at a taping of @midnight in September. After the show, I thought of my friend Anthony Atamanuik’s killer Donald Trump impression, and of how awesome it would be to see the two of them together.

Now you can watch Sanders and Trump duke it out with uncanny accuracy—and, unexpectedly, forge a touching friendship. Sanders details his romantic trips with his wife, telling the audience about how they read Department of Labor statistics to one another. Atamanuik, painted gold, does a spot-on Trump, proudly announcing, “My family’s the tightest, specifically my daughter…I’m marrying my daughter, is what I’m saying.”

If you’re in New York, you can catch Atamanuik as Trump at the UCB Theatre on Friday October 23.