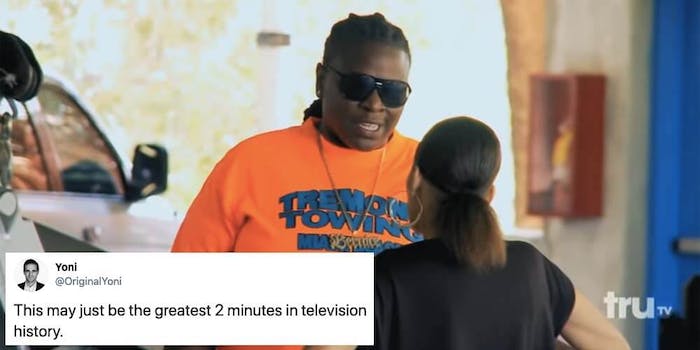 'This may just be the greatest 2 minutes in television history.'

Hyperbole gets thrown around a lot on the internet. So when social media consultant @OriginalYoni tweeted an old clip featuring a repo driver named Bernice from a now-defunct truTV series called South Beach Tow with the boldfaced claim that it “may just be the greatest two minutes in television history,” you may be hard pressed to believe him.

I mean, what about, say, the final moments of the M*A*S*H finale? Or when Hank uses the bathroom in that episode of Breaking Bad and finds a copy of Leaves of Grass on the back of the toilet? The freaking moon landing?

This may just be the greatest 2 minutes in television history. pic.twitter.com/ixoznOuEQg

In the clip, which hopefully you have watched by now, Bernice attempts to repossess a Camaro from a woman behind on her car payments. The woman is understandably less than overjoyed about it.

Tempers flare, as the woman attempts to drive off with her car. However, in doing so she inadvertently rams Bernice over the side of the dang parking garage wall–sending her plummeting down at least one story to the ground below.

But then, like a phoenix rising majestically from the ashes, Bernice survives the fall and punches out the Camaro window, ejecting the woman and her friend from the car.

What a wild ride. But unfortunately, as you may have surmised, the clip was staged. “Bernice” is actually a football coach and actress named Lakatriona Brunson, and the series South Beach Tow was known for its “dramatized reenactments” of supposedly real towing stories. In fact, the series was canceled after four seasons in 2014 due to truTV wanting to pivot to “real unscripted and less vulgar” series.

But honestly, who even cares? Because real or scripted, it was definitely one of the greatest two minutes in television history.

Not long after the tweet went viral–the clip currently has 6.3 million views and counting –”Bernice” understandably began trending on Twitter.

In 2019? I have no clue if this is real or fake, scripted or not. Either way, the character of Bernice is a badass. I hope she doesn’t become a bad guy because we ain’t stopping her. https://t.co/aHoHlfDkZ7

How is Bernice not in the Marvel Universe after this incredible performance?!!!! Your faves could NEVER. https://t.co/84Yf2s0G2q

This is the funniest shit. Bernice don’t play https://t.co/PO1F4L6Nnq

Author and activist Tim Wise also suggested a possible upcoming gig for Bernice, should the current resident of the White House refuse to vacate when it’s time to go.

Ok, so if Trump refuses to leave the WH, either after impeachment and conviction or the election itself, I think we know who can be relied upon to drag his ass out…Bernice. Forget the Secret Service or MPs..just send Bernice https://t.co/gqqolROYsl

The clip, which was taken from a hilariously titled November 2013 episode of South Beach Tow called “Bernice Goes Down,” is apparently just one of her many fantastic moments. For example, another user pointed to the time Bernice literally threw a woman in the trash.

For her part, Bernice seems delighted by her newly revitalized fame and has been happily tweeting and retweeting since she went viral. “Damn a real bihh trending?!? Y’all really fucks with me,” Bernice tweeted.

No worries I’ll be back soon!

Yes we do, Bernice. Yes we do.