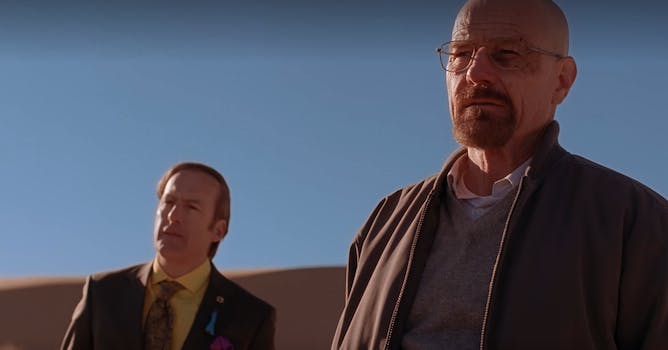 How to watch ‘Breaking Bad’ online

The rise and fall of Heisenberg.

“The One Who Knocks.” Heisenberg. “The Cook.” Water White went by many monikers before the end of his rise to power chronicled in the AMC drama Breaking Bad. What started as a struggling high school chemistry teacher with a cancer diagnosis riding the line to make money for his family, culminated in gripping drama, classic dialogue, heart-pumping action, classic characters, and yeah, even a few laughs.

Who can forget the complicated relationship between Walter White and his troublesome sidekick Jesse Pinkman? Giancarlo Esposito’s Gus Fring is as memorable a villain as Ben Linus, Ramsay Bolton, and Negan. You’ll never look at a chicken restaurant the same way again. Long-suffering white Skyler White made Anna Gunn a household name, even if she made a few misogynistic chuds angry along the way. And then there’s Saul. Legendary sketch comedian Bob Odenkirk’s portrayal of the Albequrque, New Mexico, criminal lawyer was so captivating, it even rendered a spin-off in Better Call Saul.

Best of all, the show is so fantastic, all five seasons fly by. And to think, it all started with creator Vince Gilligan’s elevator pitch for the series, which was simply turning “Mr. Chips into Scarface.” Little did Gilligan know that the show would enter the great American television pantheon. That, and it gave us the phrase “Yeah, science, bitch!”

Here’s everything you need to know to watch Breaking Bad online.

Is there a Breaking Bad movie in the works?

There is a Breaking Bad move in the works, which will be written by show creator Vince Gilligan, and be distributed by Netflix, and then later on AMC. The movie will focus on Jesse Pinkman after the events of the show’s finale.

On what channel did Breaking Bad air?

How many seasons of Breaking Bad were there?

There were five seasons of the show, but season 5 was split into two parts.

How to watch Breaking Bad online

Here are a handful of streaming services to watch Breaking Bad online. Some of them offer trials, so you can watch the show totally free.

Netflix is the king of online streaming, or at least, it’s the most ubiquitous one. The library of shows is massive, whether it’s original series like House of Cards or Orange is the New Black or popular shows like Bob’s Burgers and Breaking Bad. The entire series is available to stream on Netflix, which is also where the Breaking Bad movie will air.

AMC Premiere works a bit differently from the typical on-demand channel service. You can watch shows from the AMC family of channels as soon as they are without commercials, along with exclusive content and behind-the-scenes footage. However, you need to have a cable or live TV streaming subscription to join, plus pay an additional $4.99 a month. If you’re addicted to Brockmire, Better Call Saul, and The Walking Dead, it may just be worth the price for you.

How to watch Breaking Bad episodes

Every episode of Breaking Bad is available for purchase a la carte from Amazon Video. This is a good venue to stream from if you’ve missed a handful of must-watch episodes like “Face Off,” “Ozymandias,” and of course, the explosive “Felina.” Single episodes are available for $2.99, with entire seasons running from $9.99-24.99.