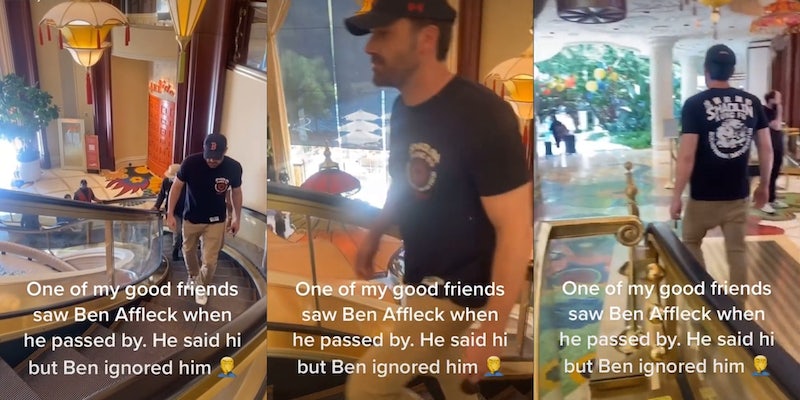 Video footage shared on TikTok shows Ben Affleck completely ignoring a fan as he ascended an escalator, but viewers say that’s just the life of being a celebrity.

The footage, shared by Jaime Núñez, or @nunezj182 on the platform, appeared to be a screen recording of someone else’s Instagram story. The on-screen caption read, “One of my good friends saw Ben Affleck when he passed by. He said hi but Ben ignored him.”

The Argo director and star can be seen looking straight ahead before reaching the top of the escalator and walking away.

Núñez captioned the TikTok, “He may seem like a dick, but Celebs do this cuz they don’t want to garner attention.”

A slew of viewers agreed, coming to Affleck’s defense in the comments.

“Seriously? About 400 people a day probably say hi to him. He probably can’t even keep a train of thought,” one user commented.

Someone else wrote, “He’s minding his own business… celebs aren’t zoo animals. Let them be. I have seen 3 celebs irl and never bothered them or said anything.”

Other viewers weren’t as empathetic though, saying fame comes at a price.

“Fame comes with a price just saying be humble and nice to fans,” one person said, while someone else commented, “Be humble Ben. Your fans are the ones who get you paid.”

A spokesperson for Affleck did not confirm or comment on the specifics of the incident but told the Daily Dot the actor is a gracious person.