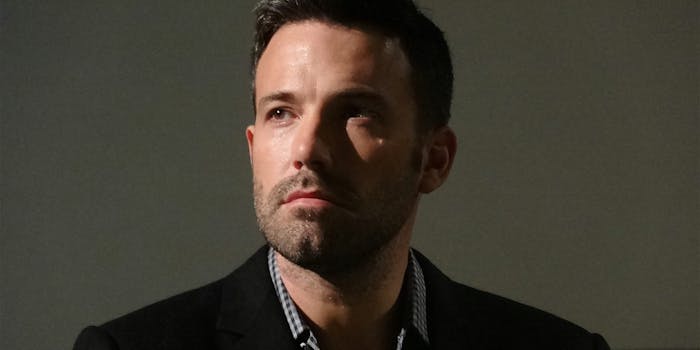 People are still talking about Ben Affleck’s huge back tattoo

Ben Affleck is probably done with the internet, but the internet is not done with him. Days after photos emerged of the actor hanging out on a Hawaii beach with his Triple Frontier co-stars, people are still talking about that weird back tattoo.

The Daily Show host Trevor Noah even asked Affleck’s longtime friend Matt Damon about the tattoo on Wednesday. Damon said he had seen the tattoo in real life, basically confirming that the tattoo is real. Damon also defended Affleck’s decision.

“I don’t believe a friend would allow a friend to get a back tattoo of a colorful dragon,” Noah told Damon.

“It’s not one man’s job to tell another what he can do to his back,” Damon replied. “I support him in all of his artistic expressions.”

If you’re still catching up, Affleck got the colorful tattoo, which appears to show a phoenix rising out of the ashes, more than two years ago. But he claimed that it was “fake for a movie” in an interview with Mario Lopez in 2016. Since it’s 2018, and he still has the tattoo, we’re assuming that it’s very real.

The back tat has become one of the internet’s favorite memes this week.

The most popular paparazzi photo from the beach day (shown in the tweet above) shows the tattoo in full detail. Another photo being widely shared captures Affleck staring at the ocean and apparently contemplating something.

“This is the most Big Mood picture ever taken,” writer Jason Concepcion declared, referencing another popular meme.

This is the most Big Mood picture ever taken pic.twitter.com/dmapXNiTse

People seemed to relate to the Big Mood that Affleck is projecting.

When you get out of the shower and stare at your closet for half an hour trying to figure out what to wear https://t.co/5LXBrNF34J

just out of the shower 7am on a monday morning https://t.co/cqX1D9STBS

And nods to his other film roles.

and the wind, it whispers, "Gigli"

Affleck has yet to publicly comment on the tattoo.