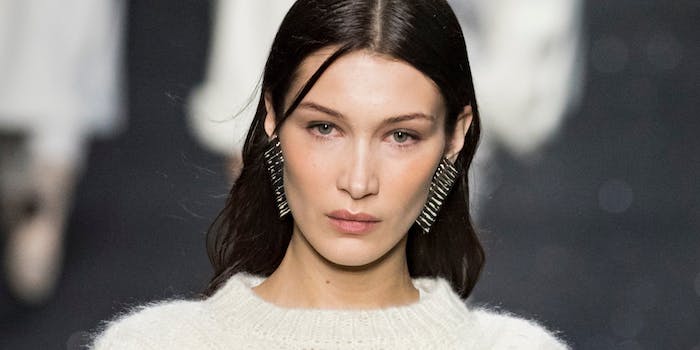 A viral TikTok and Twitter rumor suggested that Dior fired Hadid due to her views on Palestine.

Supermodel Bella Hadid has been outspoken in her support of Palestine, attending a Free Palestine protest this week and attracting direct criticism from the state of Israel.

Now, Hadid’s fans are worried that her career will suffer as a result. They’re particularly concerned about Dior allegedly “terminating her contract,” inspiring a slew of furious viral tweets. However, this backlash is entirely based on unverified rumors. There’s no evidence that Dior has ended its relationship with Hadid, who often models for the brand.

Hadid’s fans are keen to show their support for the model, who is of Palestinian and Dutch descent. But the anger at Dior seems to be unfounded.

The Dior rumor emerged on Wednesday, beginning on TikTok before gaining traction on Twitter. One tweet with 39,000 retweets states that Hadid is “being silenced, got her brand deals taken away from her including her dior brand and her family’s address is being exposed,” citing an unverified TikTok video saying Hadid was “banned from Dior.” Meanwhile, others are sharing an out-of-context video of a Bella Hadid poster being taken down in a Michael Kors store, taking this as evidence that Hadid was “fired” by this brand as well.

In reality, the Michael Kors homepage literally opens with a full-page commercial featuring Hadid. She’s the face of the label’s summer ad campaign. However, people are still replying to the Michael Kors Twitter account to accuse the brand of supporting Israeli attacks on Palestine.

As with a lot of viral rumors on social media, the Dior/Hadid backlash feels plausible without actually being based in fact.