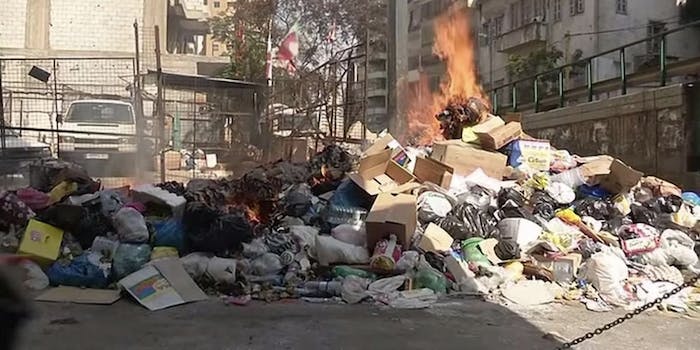 It's never a bad idea to get down—even as the city burns.

Beirut police and protesters clashed this weekend during demonstrations over literal piles of garbage on the city’s streets.

The “You Stink” campaign has called out the Lebanese government for their lack of decision-making on the matter of where to locate a new landfill, the Guardian reports. As garbage began to collect on the streets over the months, protesters cried out against the overarching government corruption and incompetence that resulted in the pile-up.

Police cracked down on the protesters, and unrest broke out during the second day of protest, as shops were vandalized and fires burned. The organizers, though, believe “infiltrators sponsored by politicians” are responsible for the violence, and sought to suspend the week’s remaining demonstrations, according to the Guardian.

Amidst the flames and furor, however, one protester was able to bring some levity to the unrest.

Very funny, in the midst of the chaos this guy starts dancing pic.twitter.com/02uvnICeyf

It goes to show you that, even in the most trying of times, under the most oppressive and incompetent governments, sometimes you just have to dance.