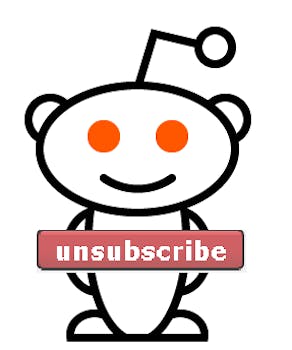 GET RID OF IT ALL.

“When people first join Reddit, the first thing I tell them to do is to unsubscribe from the default subreddits,” famed Reddit power user and moderator andrewsmith1986 told the Daily Dot in January. “Find what you like. The site has everything. … Reddit has the best and worst of the Internet all in one place.”

The longtime redditor isn’t alone in his thoughts. Suggestions that new redditors immediately distance their accounts from the likes of r/atheism, r/askreddit, r/wtf, and their fellow 17 default subreddits are prevalent throughout the site.

“It’s all the same shit. Reddit died a good year or two ago. The real reddit lives on in smaller subreddits. The main/default ones are absolute piles of donkey shit,” redditor manwithabadheart lamented in November 2011.

What makes the default subreddits so bad, though? More importantly, where can you go for similar, yet better, content instead? Here’s why you should unsubscribe from the defaults—and find far more interesting subreddits instead. 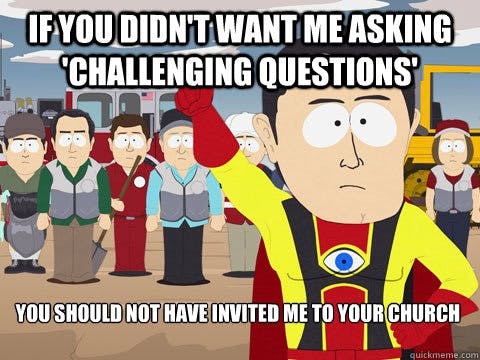 Of the default subreddits, r/atheism comes to mind first when other redditors, theists and non-theists alike, discuss the most vile corners of Reddit. Largely, r/atheism is a one-note Christian-, Jew-, and Muslim-bashing operation with little nuance.

Backing up squigs’s sentiment: posts such as a redditor bemoaning the prayers for a young girl undergoing surgery, as well as reasons why not to add someone on Facebook. And so many memes.

Specific subreddits for the departure from your individual religion of origin are available, including r/exchristian and r/exjew.

Subreddits such as r/DebateAChristian exist for more in-depth discussions, while subreddits like r/AtheismComingOut help those who are about to make the leap into atheism.

Finally, r/shutupyouguys and r/cringepics recount those instances where r/atheist users get particularly out of control.

The question-laden subreddit r/AskReddit is “for thought-provoking, discussion-inspiring questions,” according to its sidebar.

Nevertheless, most of it looks like this: “Semi-trailer truck drivers of Reddit, would you rather me merge behind or in front of you?“

And it’s so damn repetitive. Many questions (for example, “What is one thing you would change about your life?”) are found at least once per week, sometimes even once per day.

Other posts ignore the AskReddit sidebar rules altogether and do everything from solicit advice to take polls.

Fortunately, many subsets have copied r/AskReddit’s model and thus began their own “ask” subreddits. Two popular examples, with far more interesting discussions, are r/AskMen and r/AskWomen.

Others subreddits prompt users to debate specific areas of interest, such as r/AskHistorians and r/AskScience.

To see what AskReddit might have been, try r/InsightfulQuestions. 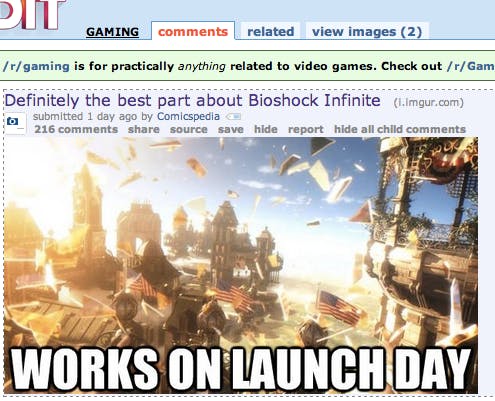 On the surface, r/gaming appears to be a subreddit for video game enthusiasts and even casual gaming fans to discuss everything related to the ever-growing gaming industry and the communities built around it.

What is it instead?

“I want gaming discussions, news and tips for new games, not pictures of game related shit someone has made, repeating nostalgia or a billion posts about the same thing,” user fraggelsmurf stated in an April 2011 comment bemoaning the subreddit.

Posts such as meme reactions to Bioshock Infinite serve as a testament to fraggelsmurf’s complaints. 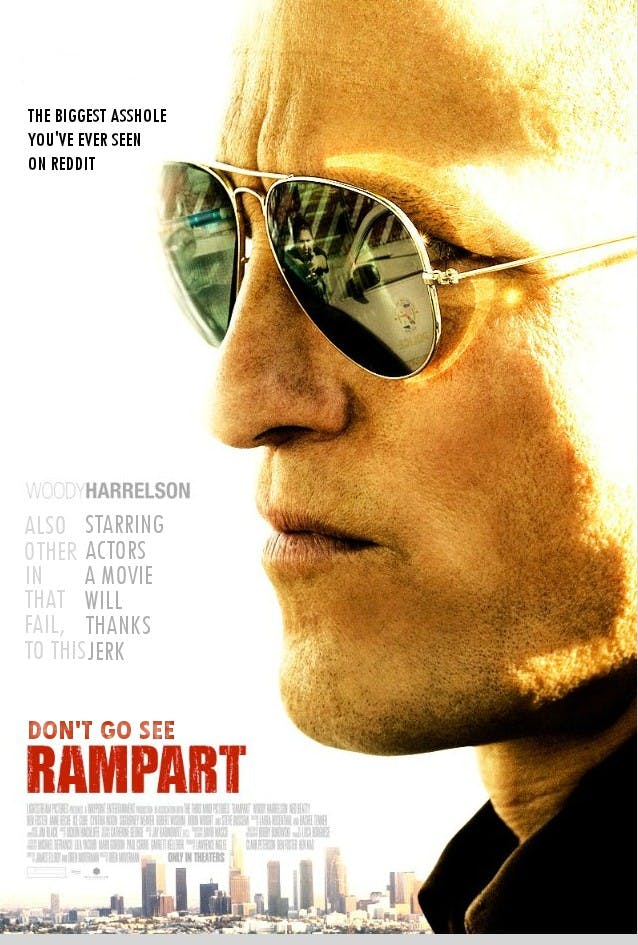 r/IAMA was once in danger of being permanently shut down. Today, it is largely a platform for celebrities to promote themselves under the guise of an informal Q&A session. But the form itself is becoming a joke, partially because of celebs like Woody Harrelson using it for easy movie promo.

Of the 10 most popular IAMA sessions of all time, only one was hosted by a non-celebrity: the AMA by the scientists and engineers working on the Mars Curiosity Rover mission.

When non-celebrities do occasionally rise to impressive heights, their doing so only opens them to the possibility of being chastised by the community’s nearly 3 million subscribers. A Patriot Guard rider discovered this when his IAMA was invaded by a member of the Westboro Baptist Church.

Like r/AskReddit, many IAMA-inspired communities have popped up. r/InternetAMA, for example, profiles popular redditors and other Internet personalities. r/ILiveIn features users describing their home locations to interested parties.

Subreddits like r/CasualAMA and r/mildlyinterestingAMA, on the other hand, detail the lives of everyday folks.

Finally, r/self removes the need to ask questions and instead is a steady stream of stories, thoughts, and other personal shares from the lives of anyone and everyone. 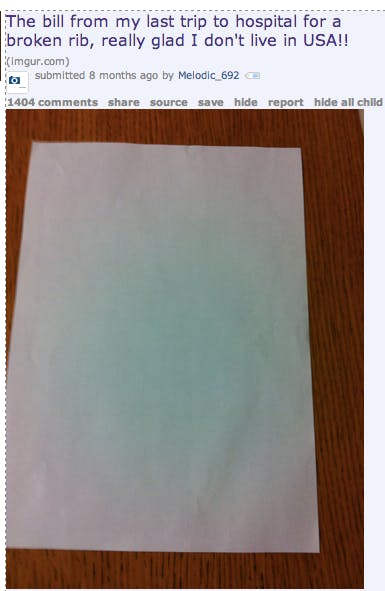 r/pics hosts pictures of anything and everything. If a camera can be pointed at it, it has a very real possibility of showing up on r/pics.

This is r/pics’ greatest disadvantage: it is too general. Interesting yet breathtaking photographs have the tendency to appear alongside content like this.

Fortunately, enough redditors are familiar with the power of images that they have created several subreddits that specify everything from the types of photographs permitted to content.

If screenshots are your cup of tea, then head over to r/screenshots. If still pictures are too unexciting, check out r/gifs.

Finally, if r/pics itself is too limited for you, perhaps you belong in r/AnythingGoesPics. 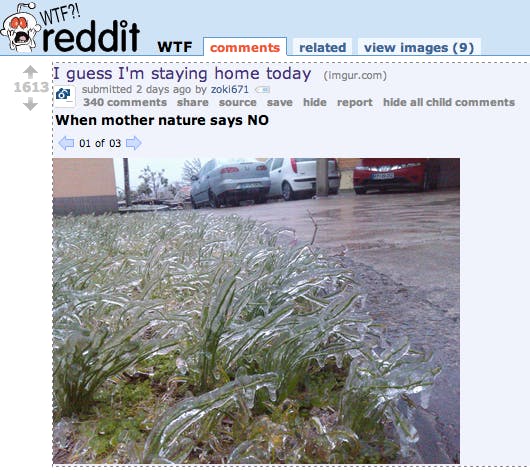 r/WTF remains one of the most active default subreddits, even though its sidebar is home to many rules and regulations beginning with “No” or “Do Not.” Moderators constantly remind subscribers of the subreddit’s policies. Much of the content is not safe for work.

And no one can agree on what WTF means. As a result, r/WTF has seen everything from ice storm remnants to the walls of an Auschwitz gas chamber.

For stories like “Interesting Urine Facts” and “Hairy Nipple Put to Use,” r/weird is your best best. r/offbeat, r/newsoftheweird and r/newsofthestupid are your sources for the weirdest news of the day. Not weird enough? r/nottheonion. Need more? r/WTF_Florida.

If you seek content that’s meant to be benign, check out r/mildlyinteresting.

And for those raised on Rotten.com, /r/spacedicks (NSFW NSFW NSFL) might still gross you out.

And if you just want to make fun of r/WTF, try r/Im14andthisisWTF. 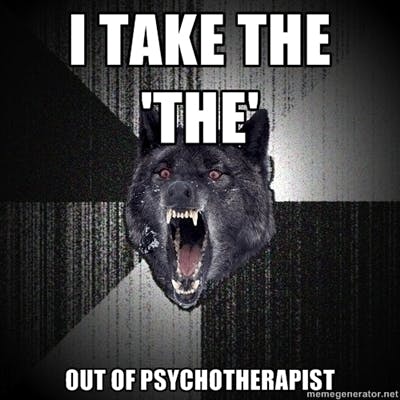 Hey, remember when image macros were novel and funny?

If you think tired riffs on racist, sexist stereotypes have actual value, just go to Funnyjunk or 9GAG.