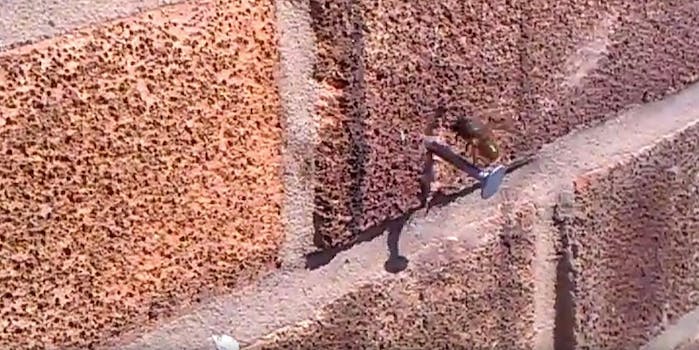 Bees are hard workers. Honey bees literally toil to death in the summer, gathering nectar and constructing their hives. But it turns out that mason bees are no slouches, either.

Chris Downes of Shrewsbury, England, found one of the determined bugs making a nest in a hole in the side of his brick house. The solution? Put a nail in the hole. Surely there’s nothing a bee can do about that.

If you’re wondering how Downes had enough foresight to film the incident, the answer is he didn’t. The bee actually pulled the nail out of the hole twice. After it pulled the nail out the first time, Downes stuck it back in and grabbed his camera to see if the same thing would happen.

To be fair, the bee is pulling a nail from a hole that already existed. It would have been way harder/impossible for the little guy to pull the nail out if it were hammered into a piece of wood, rather than just stuffed into a brick. Still, you have to admit, that’s one crafty insect.

In fact, I’m pretty sure this bee gets to be king of England now.