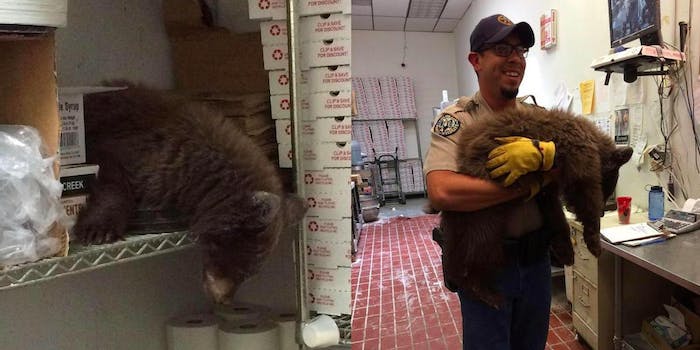 She apparently had an injured foot.

Looks like there’s a new employee at one Colorado Springs, Colorado, pizza joint who eats on the job, hides in the corner, and is a little furrier than the rest. Well, she’s a bear—and she doesn’t exactly work there.

A bear cub moseyed on into Louie’s Pizza on Monday afternoon through the front door and set up camp in the stock room. She reportedly started eating icing and other food until she eventually fell asleep, something that occasionally happens to me on a Friday night.

Wildlife officials eventually got to the scene, where they tranquilized the less-than-a-year-old cub and carried her out. She had an injured foot, possibly from being hit by a car, but she’s now being taken care of at a rehabilitation facility.

We just couldn’t bear it if anything bad happened to this lil’ cutie.