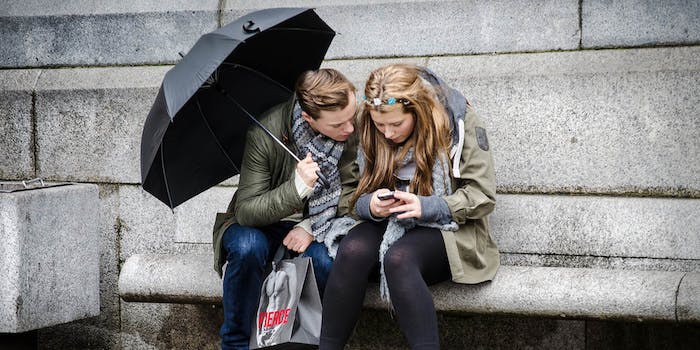 The newest texting app doesn’t give a f**k if you really meant to say that—and maybe we shouldn’t either. Earlier this week, before committing to forever hanging their words in the digital ether, terrified folks all across the Internet quietly panicked over the appearance of a new messaging app that stands to radically change the way we text.

Beam Messenger, named in honor of the developers’ goal to “beam” information from user to user, is a new texting platform that would allow users to see text as it’s typed in real time, before ever hitting send and actually transferring the data. The anxious responses have almost exclusively been variations of “NO WAY!” “I’m destined to be alone,” and “I will quit my phone if this happens.”

Sometimes we want to find perfect phrasing, and sometimes we just want to proofread for errors that might make us look stupid to people who may or may not actually care. But for whatever reason, we always think it matters. We’ve totally come to rely on the knowledge that we have the ability to accurately—maybe painstakingly so—convey ourselves through typing, and we take full advantage of it.

And it makes sense when considering the permanence of the typewritten word. In daily conversation, although we don’t get the opportunity to hum and haw over flawless sentence formation, we do get to enjoy the quickly fleeting presence of speech.

Texting doesn’t afford us that opportunity. We know what happens when we write something to someone we wish we hadn’t: There’s no taking it back. There’s no good way to reframe the statement. It just sits there, basically forever, for both you and your victim to revisit and cringe at until the apocalypse occurs and humankind is relieved finally of all future humiliating text mishaps.

But this is where Beam actually creates a different dynamic by making texting a little bit more like real-time conversation.

Similarly to our words being relayed as they’re formed, they also go away once they’ve been communicated: This messaging platform doesn’t store data unless you ask it to.

If you hit “send” after typing something, it will send the data to the server and both you and the person you sent it to will be able to access it later. But without electing to send the data to storage, although the person you’re texting will still see the words you’ve typed, your words quickly get bumped out of frame as the conversation continues. You also have complete control over the words while they remain in the window until you possibly decide to send them.

In a quick breakdown from the developers themselves, the app’s website reads:

Two people can now engage in a chat through texting as customary, however the noticeable difference is seeing the other person transmit their thoughts as they happen. There is no delay, and whenever you feel like saying something you can.

This is what we call ‘beaming in’—the ability to interrupt, interject, comment, and the like. Your friend will see it immediately, and is able to further continue his/her ‘speech,’ or address what you just said.

While you are texting inside a bubble, without breaking, you are allowed to backtrack and jump forward at will. Also you may delete the whole text altogether, gone from both devices in true real time fashion.

So while the confirmation that these conversations won’t be archived away for eternity provides some relief to the stomach-flop reaction to this new level of transparency, the reaction itself invites a new question: Why are we so weirded out by the idea of our peers getting increased insight to our thought process?

In bringing up the issue last night with some friends, all of whom I consider pretty honest and transparent people, the consensus response initially was that it’s just too easy to “blurt out” a hasty initial reaction. Sometimes it’s only after seeing it typed out that we can reconsider how to better communicate our thoughts.

This is understandable, but at what cost are we taking these measures? Instead of feeling we have to respond right away, we could say we need a second to think before responding. Then maybe opt for a phone call or e-mail later. We’ve replaced a lot of normal talking with texting, and the fact of the matter is that it’s simply not the right medium for anything beyond quick plan-making and check-ins.

We use texting to carefully construct the precise persona we want to use in daily conversations—who we want others to see us as—and that’s just not real life. Plus, I can’t be the only the one who’s tired of spending even two minutes holding my phone after a contentious text, scrolling up and down a bit, trying to figure out the exquisitely appropriate thing to say.

I actually think Beam is a fantastic prospect. Not because I have child-like hope for an outrageously honest society or anything, but because I think removing the option of texting as a frequent form of serious communication would be a healthy move, albeit kind of nerve-wracking.

We all spend way more time crafting our responses and keeping up appearances than we actually need to. I know I’ve done it often, because it’s what I’ve become used to over the years. But lately I’ve been trying to always respond to texts and emails right away (before I can forget), and on most days, there just isn’t time to slave over the keyboard.

It’s a small change in my daily conduct, but the result is that I’m way less concerned about the impression I might be giving through my phone, I don’t have emotional conversations over text, and my friends still seem to accept me. Plus, most sensible people know not to read too much into a text message.

I’m aware it’s not always that simple, and maybe some significant misunderstanding will take place or an emotional reaction will get communicated that in hindsight you’d wish hadn’t. But is that really so bad? Maybe trusting the people in our lives to bring up a misunderstanding is healthier than constantly trying to prevent the myriad misinterpretations made possible over the voiceless, toneless medium of text. And maybe letting out those raw feelings that you’d otherwise sugarcoat is actually sometimes helpful.

Despite the unified hesitance at what Beam presents for the way we might communicate in the future, I think a lot of what will actually determine whether or not this app takes off lies more in its marketing and user friendliness than our own personal fears of exposure. Because even though a less censored version of ourselves seems scary at first, almost everyone I spoke with eventually came to the same conclusion: Maybe it wouldn’t be so bad after all.

Photo via garryknight/Flickr (CC BY 2.0)