Facebook has become an uppity wasteland, and not just because your aunt is annoyed with you but won’t stop sharing Jesus for Trump* aphorisms.

The latest viral craze on Facebook is Be Like Bill, a poor excuse for a meme that’s like Miss Manners meets your local office worker who fancies himself an artist because he can draw a damn decent straight line—and freehand at that.

And, no, we’re not talking about an inspirational person named Bill, like the bummed-out piece of legislative paper in Schoolhouse Rock. The Bill in question is a pithy stick figure who is nothing like that cartoon character.

Bill was born from the Moldovian mind of Eugeni Croituru, a digital entrepreneur who probably wanted to one-up the brilliant Rare Pepes of the Internet but couldn’t think of anything better. He has somehow succeeded, and Be Like Bill has turned into a phenomenon. Its official Facebook page has nearly 1.5 million likes, but some of those likers aren’t all about that Bill life. 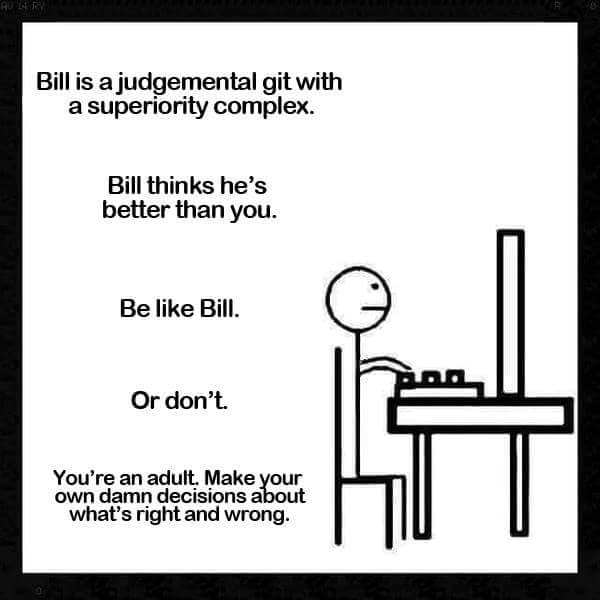 What’s comically contradictory about some popular Be Like Bill memes is the fact that they’re mostly about rejecting social media but they’re being shared all the same.

Bill doesn’t want you telling the world that it’s raining, yet he’ll stand around like a total dope for a meme about how you should just shut up already.

Bill also apparently enjoys linguistically shaming those who are doing some fairly innovative things with our ever-evolving lexicon; apparently he wants the English language to stagnate.

Plus, Bill has the slang knowledge level of the governor of Maine attempting to name “drug dealers” as if reading from a late-1990s D.A.R.E pamphlet.

If this is the meme that the next generation will someday regard as a classic, then I lament that generation. What happened to being “Like Mike” and at least getting a Lil Bow Wow movie out of the whole deal? The Be Like Bill vine or viral video or what have you would be just as boring as your great aunt’s Jesus for Trump obsession—and Bill would never condone that shit. Actually, maybe Bill’s not so bad after all.

*Note: this is not a real Facebook group or fan page or what have you, and if you make it, that’s between you and Donald Trump’s hair, I guess.