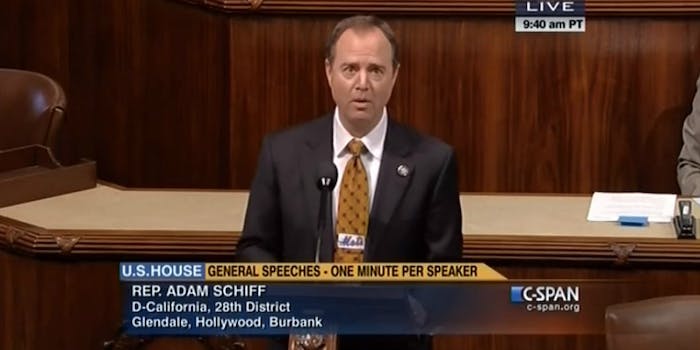 After spending 11 hours at the Hillary Clinton Benghazi hearing on Thursday—and trying his darndest to treat her as gently as possible—Rep. Adam Schiff suffered the ultimate humiliation on Friday as he paid off a bet to one of his colleagues.

And it must have been even more tedious than the previous day’s hearing.

But a bet is a bet, and because Schiff’s Los Angeles Dodgers fell to the New York Mets (represented by Rep. Steve Israel in this particular gentleman’s wager) in the MLB postseason, the California congressman owed his colleague from New York a song.

That’s how we got this moment on the floor of the House.

It must have felt to Schiff as if his one-minute general speech lasted much longer than 60 seconds.

If the Mets triumphed in the National League Division Series, Schiff would have to send his colleague gourmet popcorn from Los Angeles and wear a Mets necktie on the House floor while delivering a one-minute speech praising his team’s victorious opponent. If the Dodgers won, though, Israel would owe Schiff two dozen fresh New York bagels and would have to don a Dodgers tie while giving the same one-minute speech.

In Israel’s mind, the outcome was never in doubt.

“Schiff is my best friend in Congress,” Israel said before the series began. “He just has terrible judgment on baseball.”

As for how the original “Meet the Mets” fight song sounds, here’s the 1962 version. Compared to this, Schiff’s version, was, um, lacking in enthusiasm.