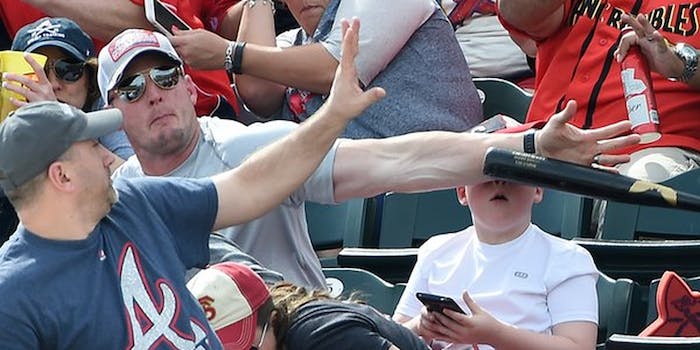 This could have been a lot worse.

There’s nothing like a near-death experience to jar you out of looking at your phone screen—like tripping over a curb, missing your bus stop, or getting smacked in the face by a flying baseball bat.

We’re hoping that one young boy who nearly met his demise thanks to the latter experience has learned his lesson.

Shaun Cunningham and his son were at Saturday’s baseball game between the Pittsburgh Pirates and the Atlanta Braves when a bat flew into the stands right where they were sitting.

Cunningham’s son was looking at a photo on his phone and thus didn’t see the blunt object headed for his face. Cunningham heroically shielded his son’s face with his arm in a moment caught on camera by Tribune-Review photographer Christopher Horner.

@BiertempfelTrib The two frames showing just how close the bat was to the boy's head. pic.twitter.com/7VwnfWp8L1

The bat still hit the boy in the shoulder, but he’ll be fine. His father, meanwhile, has some bruising on his wrist. And while the two didn’t get anyone’s autograph at the game, they did get to keep the bat.