If you’re as cynical as most public-transit riders, it’s safe to say you sometimes feel like a piece of raw meat riding the rails: at times packed in like a sardine, occasionally marinating in the odors of your fellow passengers.

Some enterprising (or forgetful) BART rider took the metaphor a little too literally and left his prime cut of beef on a rickety transit car. Countless people accidentally tenderized the steak by slamming their asses down on it, while others avoided the salmonella trap altogether.

Did you forget your raw slab of meat on BART last night? https://t.co/DnoLcoeF0Y pic.twitter.com/s0cwG2fZR9

The mystery of the porterhouse passenger has captivated Bay Area residents, to the point that the slab of steak has already become a highly topical meme.

It’s just one of many inanimate objects frequenting the region’s sorry excuse for some type of subway system. Massive fridges, oversized televisions, and all kinds of miscellanea have made it aboard, with surprising frequency.

This shit is pretty damn delightful to transportation manager Tera Hankins, who giggled about some of the more risqué items left on BART in an October interview with the San Francisco Chronicle, but who was also left wondering why someone would leave, say, their prosthetic limb behind and never claim it.

“We get everything from teeth to wheelchairs to prosthetic limbs,” Hankins said of the more human touches added to BART cars. “They come on with a leg, and then sometimes they leave without one. We wonder what happens to these people sometimes.”

One of the Bart stations closed today because a dismembered foot was found. They "think" its from a lady who lost her leg, last month.

Severed limbs and porterhouse cuts aren’t the worst items to make it down a station’s perpetually broken escalator, onto BART, and through the screaming hellscape that is the Transbay Tube, however. Hell, they’re not even the first raw faux pas that BART’s ever seen.

That’s right: In 2013, some couple fucked on BART and filmed the transit tryst. Naturally, this footage made it to Worldstar, the Internet’s de facto Library of Congress for all things “aww shit”-inducing.

A woman reportedly related to the amateur snuff director came forward shortly thereafter, claiming that the director was pretty proud of his newfound notoriety.

Since then, it’s been a juicy ride for passengers. Liquids of all types have been left aboard BART cars:

Someone on BART took the time today. We thank you. #BART pic.twitter.com/nl9USaXPNI

I see someone started their morning commute with a bang on my #BART train. pic.twitter.com/RkNMJ7HuTI

.@bartdiaries Wow, urine and feces on the @sfbart train this morning! Happy New Year everyone! #WhatsNext

But BART isn’t all hookers and blow or whatever salacious shit it is that forced its overlords to finally ban carpet once and for all in its interiors.

As with other large-scale public transit systems, BART hosts a regular rotation of buskers and beggars. And given that the train regularly rides through hipster meccas across the bay, some pretty twee shit has happened there. This heavy duty red swing wasn’t the worst addition in the world. 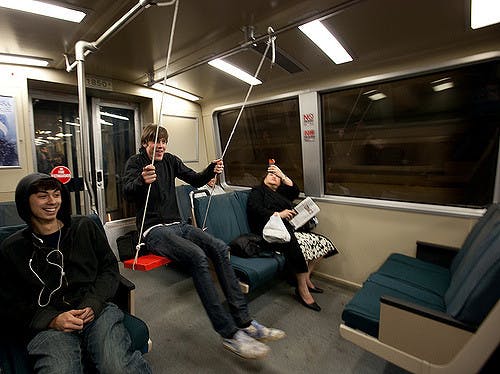 Photo via Neil Berrett/Flickr (CC BY 2.0)

OK, maybe that wasn’t the best thing in the world. That woman looks 100 percent done with it. And so are most passengers at this point.

Just a regular ol' morning on the way to work on the #bart train today.

Don’t let the door hit ya.