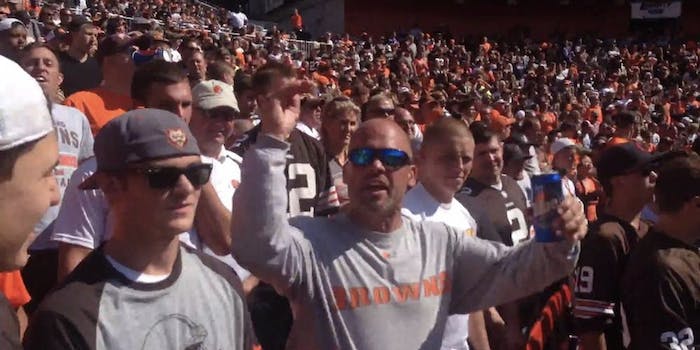 This misanthrope is basically the Larry David of the sports world.

Wanna know what it feels like to have thousands of people want nothing more than to see your head trampled under an NFL team’s cleats?

Then you should probably do what this (most likely very inebriated) Baltimore Ravens fan did in a crowd full of Cleveland Browns fans, right after his team scored a touchdown against Cleveland.

From the maniacal cackling to the gleeful manner with which he lords his team’s victory over his fellow bystanders, everything about this man’s actions is a case study in antisocial behavior. A stadium full of people flipping the bird, chanting “asshole,” and staring at him with naked contempt only encourages him, to the point where he’s practically bathing in their hatred. This is basically the Larry David of sports fandom.

We’re not sure if this guy made it out of the stadium in one piece, but we do know this: Even if rooting for the Ravens isn’t exactly popular these days, unabashed misanthropy never goes out of style.