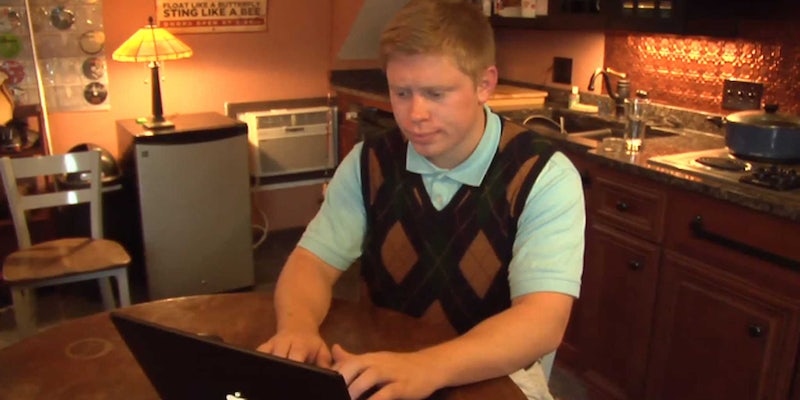 Like other memes before him, the real-life human being behind Bad Luck Brian now has a YouTube channel.

Bad Luck Brian is trying to change his fortunes by launching a new YouTube channel.

Kyle (he’s never provided a last name), whose unfortunate seventh grade class picture has become one of the Internet’s most popular macros—he is the personification of bad luck—is trying to capitalize on his online fame by turning to the popular video sharing platform.

From what I’ve been able to gauge from the first clip, the channel will be nothing more than the continuation of the meme, except in video form:

Despite the failed attempt at humor, Kyle has garnered a small amount of attention. The video has been viewed more than 30,000 times since it was first published on July 24. The Bad Luck Brian channel has also amassed more than 10,000 subscribers. Not too shabby for a 25-second bit of unfunny footage.

News of the YouTube channel spread to Reddit, which was largely responsible for making Bad Luck Brian a thing in the first place. Unfortunately for the budding Internet star, the reaction on the social news site has been less than flattering.

“This video makes me want to punch him,” noted I_LOVE_THE_POONANIE.

This last comment is more truthful than its author probably intended, as evidenced by the fact that Laina Walker—best known for her Internet-imposed alter ego “Overly Attached Girlfriend”—recently uploaded a YouTube video of her own featuring—yep, you guessed it—Bad Luck Brian. It feels like a crossover episode of a sitcom, only with worse writing and acting.

In defense of Kyle and Walker, I too would try to capitalize on the unexpected name recognition. After all, if Blake Boston—best known as “Scumbag Steve”— can do it, why not them?

That said, if you’re going to make a YouTube video and/or channel, at least try to provide some value. Simply being aware that your persona is a joke is nowhere nearly enough.