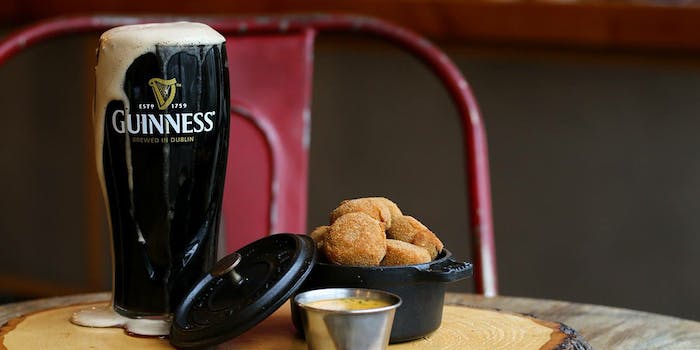 You can't botch a Guinness pour worse than this bar did, and they upset all of Ireland with their actions.

Today is St. Patrick’s Day, a day where everyone pretends to have an affinity for the Irish so they can excuse away their alcoholism.

And while it’s perfectly fine to celebrate, if you are going to culturally appropriate away a nation for the sake of your own addiction, at least have the decency to try and respect their customs.

A pub in Canada didn’t, and nearly set off an international incident with their St. Patrick’s Day toast.

Can you figure out why?

That is about as bad a Guinness as could be poured. Like, where’s the head? WHERE’S THE DAMN HEAD?

I’ll tell you where it is. It’s running down the side of the Guinness, where you can’t friggin drink it.

The Railtown Cafe in Vancouver posted the picture to their Facebook page, and probably did not expect a barrage and deluge of insults. But boy did they come, almost immediately.

Got the name wrong and the beer wrong (Irish people take umbrage at the use of T’s instead of D’s).

The news made it all the way across the pond, and over there, the hate was great. One paper went so far as to call it an affront to the people of Ireland.

Damn, that is hot.

The owner blamed the mistake on using a can instead of a tap for the picture. Speaking to Carol Off, host of As It Happens, Dan Olson said he understood what he did wrong.

“The picture was not representative of us. We actually do know how to pour a Guinness. It was a mistake and we take full responsibility for it. It was coming out of a can. It was frothing over the tip like you’d find a Budweiser in a tailgate commercial. So, instead of cascading up to have a nice proper head like Guinness is supposed to, it was a mess.”

That said, the bar is making amends for their actions in an amazingly awesome way. They are giving a free pint of Guinness and a shot of Jameson to anyone with an Irish passport who comes into their bar today.

Thanks for the friendly comments, everyone! We’re not all a bunch of maple-syrup drinking snow farmers and to make up…

Now that is the way to repair international relationships. Maybe Rex Tillerson could learn a thing or two.