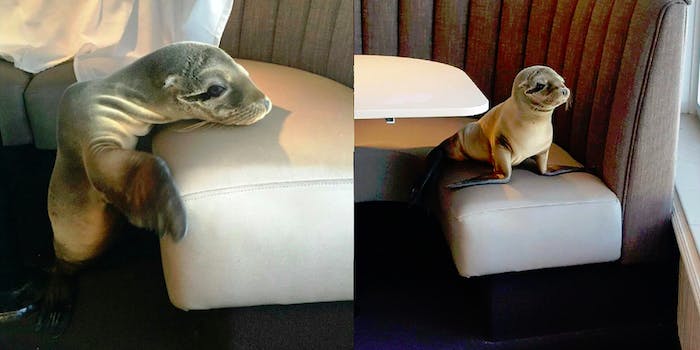 A baby sea lion is making waves on the Internet after cruising into a restaurant Thursday morning.

Bernard Guillas, executive chef at The Marine Room in San Diego, California, posted some pictures of the aquatic critter after it seated itself at a table—and not just any booth, but a window seat with a view of the ocean.

While this looks like quite the adorable situation, it’s not all rainbows and butterflies. According to the Associated Press, the 8-month-old female pup was underweight and dehydrated when it made its way into The Marine Room and eventually fell asleep at the table—much like your typical hungover human brunch-goer. SeaWorld was alrerted, and rescuers we able to take her in for recovery.

The sea lion’s poor health isn’t an isolated event: California has seen an “unprecedented” number of starving sea lions lately. Scientists blame a lack of food for the animals caused by higher-than-normal water temperatures. Thankfully, experts are “cautiously optimistic” about restoring this particular pup back to health.