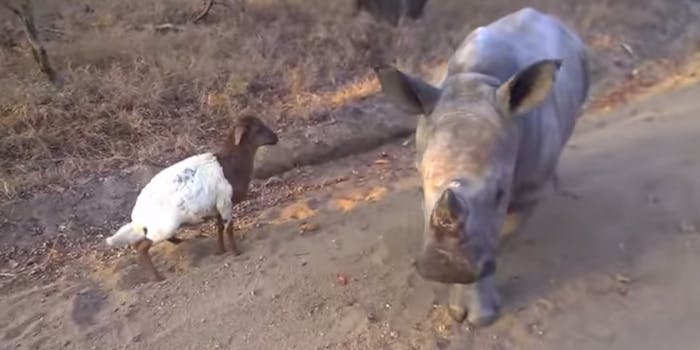 Ah, the rhino, one of nature's most ferocious killing machines, so fierce and vicious and awwwww lookit so cuuuute.

Meet Gertjie. Gertjie, or as his friends call him, Lil G, is an orphaned baby rhino whose mother was killed by poachers for her horn in May. Gertjie, who was then just 3 months old, was found refusing to leave his dead mom’s side.

But there’s a bright side to this story. Unable to survive in the wild, Gertjie was taken in by conservationists at the Hoedspruit Endangered Species Centre in South Africa. There, he got his own room (complete with webcam!), eight regular feedings a day, and best of all, a very special companion: Lammie the sheep.

Lammie was introduced to Gertjie as a companion in June, shortly after his arrival at the HESC. As you can see from this video, uploaded on Monday, the two hit it off well—so well, in fact, that Gertjie seems to want to hop, jump, and run like a sheep himself!

South Africa is home to the vast majority of the rhino population. Once Gertjie gets big enough, probably in another 12 to 15 months, he’ll be removed to a reserve and hopefully reintroduced back into the wild.

In the meantime, you can see lots more videos of Gertjie doing things like chasing ostriches and enjoying his first mud bath on the rescue center’s YouTube channel and website.