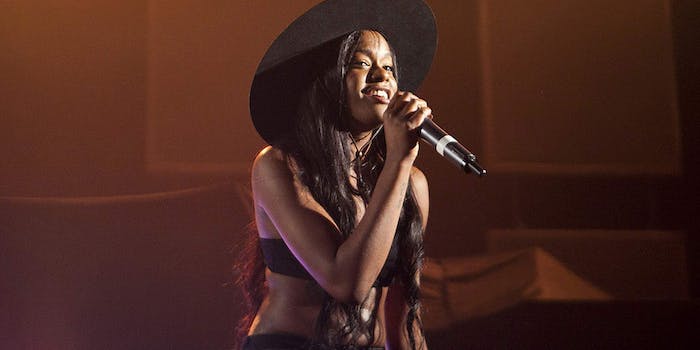 Let’s talk about the word “faggot,” shall we?

And hip-hop star Tyler, the Creator still courts criticism for his use of the dreaded F-word in his raps. It causes some to question whether they can continue patronizing his art and creativity if he’s disregarding the pain felt from hearing a historically anti-gay and misogynist slur.

Now, for yet another time, the hammer falls on Azealia Banks—who used the F-word while leaving a red-eye flight, one where a flight attendant and another passenger allegedly held her from exiting a plane, restricting her movement, and included an apparent physical altercation.

First, to be abundantly clear, as a Black, gay, gender non-binary person, the word “faggot” hearkens pain for me, as it does for others. I heard it incessantly when I was bullied from as young as the age of 5 for acting “like a girl.” And when I slowly started to publicly share my queer identity in high school, years before I would come out again (in 2014) as a non-binary person, “faggot” became both misogynist insult and homophobic slur. I was socially isolated, physically threatened, attacked, made to feel unwelcome at school, in social settings, in public spaces, and institutions. That word, for those with privilege and power, can make the lives of queer people a living hell—and it’s often used when queer and trans people suffer brutality and hate-fueled murders.

That word, for those with privilege and power, can make the lives of queer people a living hell—and it’s often used when queer and trans people suffer brutality and hate-fueled murders.

I often hear that word from people who are cisgender and heterosexual. Yet the word, coming from Banks, translates in a way that feels differently than when I read the headlines about Baldwin, Carder, and Tyler, the Creator. The two former men are both cisgender, heterosexual, white, rich, and arguably powerful. The latter is a cis, hetero, Black, and affluent rapper. The only things they all share in common with Banks? Each person has large platforms, and their words are often publicly perceived, whether they like it or not. But the major difference? Azealia is bisexual. She’s a member of the so-called community of which I am also part.

Judging by most mainstream (and even gay) media treatment, Banks is in no way seen or described as a member of the LGBT community, although she’s been openly bisexual for years, and tweets and raps about how she “licks pussy and tits” and enjoys it. Yes, that behavior at large is something we call bisexual erasure, a way of denying sexually fluid people their identity by implying it’s inauthentic, a phase, or not worth noting. It’s rooted in biphobia.

And to make matters worse, it’s being fueled by the media, and it’s happening on #BiWeek. Banks’s sexuality, gender, and race, are inseparable parts of who she is, and those identities are inseparable to her art and her public image. Yet as a Black woman, she’s presumed to be heterosexual, because it’s often the first and only assumption when a Black person uses a word like “faggot.” That’s even when they’re within the LGBT community, as was the case with a supposed “hate crime” in New York City earlier this year—which included the use of the word “faggot” from a Black, gay man who allegedly defended himself against the physical and verbal attacks of a white gay couple.

But Banks, too, because of who she is as a non-hetero woman, feels the brunt of misogynist insults that share some commonalities with the word “faggot.” That includes the words “bitch” and “cunt” that many gay men cling to for colloquial usage (context dependent), or to denigrate any woman. Do queer men and trans folks, who often deal with the brunt of the word “faggot,” owe her any consideration when their pain is disregarded vis-a-vis the usage of a slur? Not necessarily. Not a damn thing.

Gay and queer people, who share community with Banks, don’t have to give her behavior a free pass—nor should they in every instance. Yet the politics of language, and the usage of slurs within the LGBT community, in the media, by celebrities, by everyday people, is much more complicated than many would otherwise purport.

Yet the politics of language, and the usage of slurs within the LGBT community, in the media, by celebrities, by everyday people, is much more complicated than many would otherwise purport.

Classic example? The spat over RuPaul’s usage of the word “tranny” and “shemale” on the hit Logo series RuPaul’s Drag Race. The only reason those words, particularly the latter from a special segment, are no longer allowed on the show is because the network took a strong position on it, siding with the trans community and advocacy organizations. The stories of trans community members ranged from why the word “tranny” is harmful, akin to the harmful nature of the word “faggot,” or why some trans folks could care less about the word coming from a gay man or a drag queen. And guess what? If someone’s not trans, then it’s not their business, in this case, to tell the affected group how to feel about a word that disproportionately targets their identity.

Some gay men wanted badly to keep that word instead of just taking the loss—yet the politics within the trans community weren’t necessarily unified on banning the word “tranny” (from non-trans people), or accepting the more familial, and purportedly reclaiming usage among trans community ranks. I’m non-binary, and run along the gender spectrum, but my gender presentation and expression are not read as trans, and I don’t feel I have a place in that conversation. I felt my role was to sit back, listen, and allow the trans community to lead the way.

Yet this time—when I think about Azealia Banks’s use of the word “faggot,” as a non-binary gay person—I’m part of the discussion, because that word generally affects me on multiple layers. It strikes at my sexuality, gender identity, expression, physical presentation, and even my Blackness. Her multiple usages of the word, in different contexts, with gay men, has raised eyebrows for sure, and that another controversy emerged signals that she still feels readily able and willing to use the word. And Banks could stand to be challenged by her community on this, without injecting other expressions of misogyny, sexism, biphobia, and racial prejudice.

But, asked and answered, right? We’ve already been there, with the first and perhaps most notable example, when she called Perez Hilton a “messy faggot,” during an argument they had on Twitter in early 2013. Immediately, most mainstream (and gay) media outlets rushed to Hilton’s defense, and in some ways understandably so, because Banks used a slur. Then (and again now) her membership in the LGBT community was often dismissed, ignored, or questioned as inauthentic or not a possibility. And, at the time, Janet Mock questioned the media’s ambivalence to Hilton’s longstanding trend of transphobia and misogyny, yet they pounced on Banks’s tweets. Then came a headline that lumped Mock into a spat she had nothing to do with.

As she explained at the time, in a piece at xoJane:

She continued, highlighting why selective outrage on violent language—especially when favorite public figures are involved—should be questioned. It could be applied to Hilton, just as much as Banks, or any other celebrity implicated in harmful behavior:

Being a critical fan means that you love a famous human being, knowing fully well they are flawed and can make mistakes due to their privilege-blindness or outright ignorance (whether knowingly or unknowingly practicing misogyny, transphobia, homophobia, ableism, racism, etc.). When they f*ck up, it is your duty as a critical fan to make them better, call them out and educate them. Your job is not to create excuses and adamantly defend their mistakes because they are so fierce in your eyes.

Yet here we are again—without anyone on the Internet knowing what truly happened on that plane, without anyone understanding that she may have felt physically threatened and/or allegedly attacked—and Banks gets automatically painted as the sole source of outcry in the situation. That’s both given the video from the plane, and in the public outrage online. As Fusion’s Charles Pulliam-Moore notes, many of the critiques of Banks “have overshadowed the fact that she was physically overpowered by a number of white men on camera.” Apparently, she may have been presumed in the wrong by the plane crew, even if she was in the right. But, still, none of us know that for sure.

That she’s a repeat offender, for some, is enough to consider her a lost cause, because social graces indeed aren’t an endless well.

In this sense, I sit with truths and ideas that aren’t necessarily in competition with one another:

1) Banks would do well to listen to the community, continue getting better educated, and apologize not only to her fans, but to fellow LGBT people she’s hurting with her usage (and perhaps even her definitions) of the word “faggot.”

2) The community and the media can intervene without engaging in implicit or overt racism, misogyny, sexism, or biphobia.

3) Delta Airlines needs to continue investigating, and either acknowledge or be accountable for any customer service errors, passenger disagreements, or other factors that caused the situation to escalate—with their staff directly involved.

Those directly affected by the word “faggot” have every right to be angry about its violent usage, when that happens. Yet we must also sit with the reality that, as members of an LGBT community, those who feel able should guide fellow community members into dialogue and accountability when they mess up. That she’s a repeat offender, for some, is enough to consider her a lost cause, because social graces indeed aren’t an endless well.

But, in reality, people we love, and people we don’t love but encounter often—and even us, ourselves—may mess up multiple times and be called out before we finally get it. Whether we like it or not, repeat offenses are part of what makes us human, whether it’s in the workplace, hanging out with friends, or during an altercation on a red-eye flight in Los Angeles. In centering our humanity, we can get to the heart of the matter, while being cognizant of our implicit biases, our privileges, and limitations.

It’s not perfect, and it’s just one intervention to take on violent language. But it’s one type of sustainable intervention, one that’s more evergreen and elevating than any move to dehumanize people like Azealia Banks.