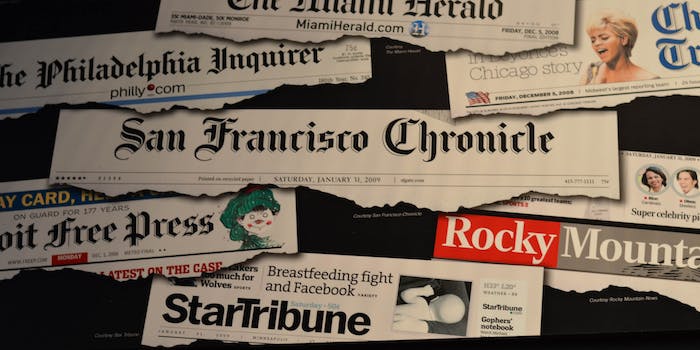 Meet the creator of the ‘New Zoid Times,’ a fake news site made from real headlines

Daniel Young is using lies to get to the truth.

Daniel Young, creator of the New Zoid Times, an automated website that creates fake news stories by taking real headlines and remixing them, operates by a simple maxim: “It is often best to introduce a profound truth in the form of art or amusement.”

Here are some of the best headlines the Zoid algorithm has spit out so far:

Vice President Joe Biden Will Not Stop Traffic To Rescue A Kitten
Pope Wants To Be On The Cover Of Rolling Stone
Man Has A Meaningful Life, According To Science
To Infinity And Beyond: Light Exposes Nipple Piercing At Kim      Kardashian’s Birthday Party
Sanders Outruns A Horse

Of course, they don’t always come out quite so well:

For the most part, though, they read as if they could be real headlines. You can even add your own, which are then thrown into the mix with everything else. After adding a few DailyDot headlines, it was fun to see phrases like “13 year old renewed for Season 2” and “Google Frightgeist Backs Greek Call For Debt Relief Talks” bounce back.

The Daily Dot got a chance to talk with Young over email about his creation—as well as his somewhat arcane philosophy. 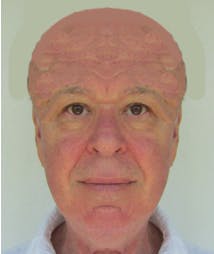 The results of your blended headlines often read as if they could be real. What do you think accounts for this?

Reality is nothing more than the chance combination of possibilities. This program (and life in general) does nothing more than take the fragments/forces/molecules involved and play with them over time, using both eternal randomness and some basic rules. And that produces things that look “real.”

According to the website, the New Zoid Times “continuously deconstructs the latest news headlines and reassembles the pieces into new, counterfeit headlines.” But how was this achieved? Are the original headlines entered in manually? What’s the secret?

A well-designed computer program automatically collects, disintegrates and recreates news headlines. It would be impossible to deal manually with thousands of incoming headlines a day and inconceivable to endlessly recombine their fragments with a high degree of coherence. It took a year just to create a dictionary of more than 20,000 verbs in all their possible forms. That is central to the fragmentation and recombination of headlines in relatively coherent form.

Your first version of NZT presented the created headlines as coming from parallel worlds that you were traveling through. What made you decide to drop that premise this time around

Profound as it was, it was a concealment and a sort of sugar-coating. Although it is still worthy of study as historical material, the focus should be on the therapeutic transformation of the news information with which the society is being controlled, distracted and sedated.

You’ve studied in several different disciplines and worked in a number of fields. How did these various influences contribute to the creation of the New Zoid Times?

Law made me sensitive to possible legal issues in my designs and to the limits of trying to control Homo sapiens with laws. Design of products made me realize that there is a limit to the beneficial influence objects can have on behavior. That is why I am moving to the design of “amusements” and a quasi-religion.

People are invited to mix in their own headlines, but the results, as you say, are for their eyes only, and aren’t added to the remixed headlines the public sees. Do you and your team have a way of seeing what people are mixing in? If so have you noticed anything interesting about what people are adding?

We have no way of seeing what people write or what their writing produces in the way of false headlines.

You’re also the creator of philosophy you call “Luckism”. Can you explain what this is and how it relates to New Zoid?

Luckism® extends the idea of chance (employed for therapeutic, satirical and entertainment purposes in the New Zoid Times™) to make it a fundamental operating factor in a life-guidance system. Human obsession with “control” leads it to ignore the vastly greater operation of unpredictable elements in all things from the quantum universe up through daily life. So Luckism™ asks for much greater modesty in human behavior—based on harmonizing with the proven, ultimately unknowable realities of the world, not hypothetical deities.

How will New Zoid, and the concepts behind it, change in the coming months and years?

Hopefully, its coherence will continue to increase as we do fine tuning and as we adjust to the ever-changing development of the language. Like a chef, I have the ability to change ingredients (the news content.) And it will be a while before I have the right mix of international, domestic, oddities, celebrity crap, sports, etc. Or, I may just keep playing with the ingredients to amuse myself. The concept will not change because it is, at bottom, an ongoing, disruptive and beneficial interaction with a dominant form of information dissemination produced by the ruling power structure.

What do you hope that individuals, and society as a whole, learn from reading the New Zoid Times?

Beware of information addiction. Beware of those who control the information. Laugh at their fabrications. Use your direct perception of the world to reach conclusions. Enjoy and respect the operation of chance in life and nature.

Has anything about the project, or people’s reaction to it, surprised you?

Too soon to tell. If it’s a true work of art it will be seen in many different ways. By the way, I want to mention there is no commercial motive here. It’s pro bono publico. I do plan to approach museums who may want the artistically altered headlines streaming constantly on their premises in a mockery of public LED news tickers.

And the profound truth that Young is introducing?  Well that’s a little tricky to pin down. There’s undoubtedly something there, but it’s hard to say exactly what. Maybe he exposes the ridiculousness of current events?Maybe he challenges us to look more closely at the things that are making headlines?  Maybe he’s just having fun?  Time will tell.