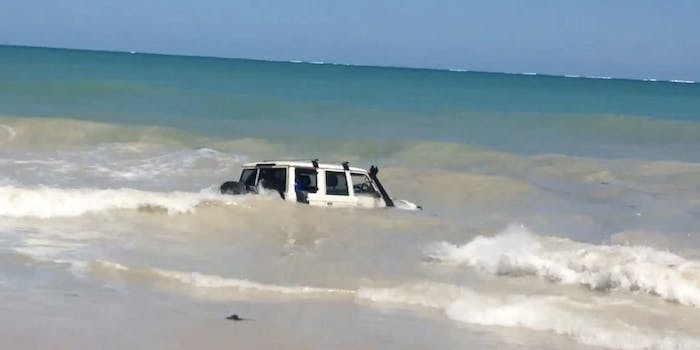 Police chase ends with suspect driving straight into the sea

Perhaps buying into the Disney notion that life is better under the sea, an Australian man who led police on a two-hour chase tried to elude authorities by plowing his allegedly stolen vehicle straight into the ocean.

Police have just arrested a man after a pursuit through Two Rocks.
STORY: http://t.co/YRbSy8XdRN#7Newshttps://t.co/14GuXhv7NV

The disastrous dive capped a wild ride through the dunes of Two Rocks, a suburb of Perth in Western Australia. The Western Australian reports that “the man climbed on to the bonnet of his vehicle, but struggled to stay on as waves washed over him,” and was pulled from the surf by two officers.

This is the car allegedly involved in a police pursuit. It drove into the ocean. A man's been arrested @7NewsPerth pic.twitter.com/aQpjW1z2Cg

Arguably stranger than trying to make a getaway in shark-infested waters was an interlude that occurred earlier in the pursuit.

According to the Western Australian:

At one point, before reaching the beach, [the suspect] stopped at the intersection of several tracks, got out of the vehicle and appeared in no hurry as he appeared to deflate the pressure on his tyres, checked the vehicle and drove on.

Maybe with more air in his tires he could have floated to Madagascar.

Think you can escape us in your stolen 4WD at #Wilbinga? We have 4WDs too, and air support #youloose #seacruiser pic.twitter.com/7aJxsAj7P6