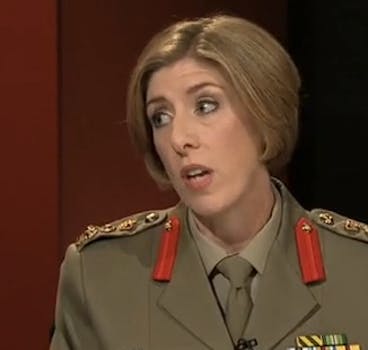 Will Australia's military follow in the footsteps of Israel's?

The Australian Defence Force (ADF) is looking at how it uses Twitter and Facebook, and hinted that it one day may follow in the footsteps of the Israel Defense Forces (IDF) by providing up-to-date details on military operations.

“As we learn about social media and as we understand how to use it effectively, you would potentially see the capacity to have much more active running commentaries,” Brigadier Alison Creagh, ADF director general of public affairs, said according to AAP. “Would it ever be that minute-by-minute, near real time or almost real time, I think depends on what the issue is.”

Last month, the IDF provided through its Twitter account a running update of the conflict between itself and Hamas and other military groups in Gaza. It was on Twitter where the IDF first noted a surgical strike which killed a Hamas military head in an online campaign Creagh said was “very powerful” and “pretty compelling.”

However, the ADF is not quite sure it could run such a stream of updates any time soon, as Creagh said the work needed to maintain it would be “extraordinary,” and the ADF is unlikely to have enough resources.

Regardless, it is fascinating that the ADF is even considering such an endeavor. Sharing military operation information online certainly has its challenges, as doing so could compromise the location and safety of those on the ground. Issues of objectivity come into play as well, as the events are only presented from the perspective of an involved party; a real-time military press release, iif you will.

Meanwhile, Australia’s military is reconsidering its guidelines for what its ranks can do online after incidents in which troops posted photos of themselves carrying machine guns and shared anti-Islamic comments on Facebook after a Muslim protest in Sydney.

Soldiers sharing photos with loved ones while they’re stationed abroad can carry security risks too—geotags embedded in the images can give away troop movements.

“We shouldn’t be so risk-averse that we actually don’t encourage people to use social media, just on the off-chance that they might do something wrong,” Creagh said though the ADF is considering a mandatory social media training program.

During last year’s Exercise Talisman Sabre, a biennial joint exercise with U.S. forces, the ADF ran a Facebook page where it provided updates on things like fuel spills and operations.

While the ADF appears a long way from offering live updates on an ongoing mission, it’s an intriguing pointer as to the online future of warfare.