The gunman has been identified as Man Monis.

Four videos purportedly depicting hostages in the ongoing standoff with an Islamic militant in Sydney, Australia, were uploaded and then deleted from YouTube within an hour.

The Daily Dot saw three of the four videos before YouTube deleted them around 8:00am EST, giving the following error message: “This video has been removed because its content violated YouTube’s Terms of Service.” Each of those three depict a different woman identifying herself as a hostage. Each appear under duress but doesn’t appear to have suffered physical harm.

Nine News Australia has identified the gunman as Man Monis. The YouTube channel that uploaded the videos is associated with a different name. With those four videos scrubbed, the only remaining history of activity on that account is liking a Barbara Streisand music video four years ago, and subscribing to two YouTube channels.

The subject of one of the four videos, screengrabbed below, appears to be the same woman shown by news outlets on the scene through the glass door of the Lindt Cafe in Martin Place, where a gunman has taken control. 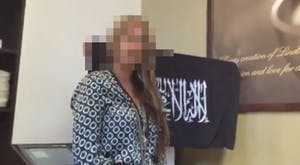 What does the flag held up by the #sydneysiege hostages mean? We get an expert's opinion. http://t.co/kB72LEg5vr pic.twitter.com/ggFf8v4AO7

“I’m one of the many hostages here at the Lindt Cafe Martin Place,” she says in the video. “We had three specific requests and none of them have been met.”

In accordance with police request, the Daily Dot won’t publish those demands.

“And most importantly, there are three bombs around George Street, Martin Place, and also at Circular Quay,” the woman says in her conclusion. “And in order for those not to be ignited we need these three things to be met as soon as possible. Please help us.”

Further information about the situation is sparse, as the hostage situation is still ongoing. At least five hostages have successfully fled, NBC News has reported. As shown in the image in the tweet above, an Islamic State–style flag does hang in front of the store. According to an expert who spoke with Australia’s Sky News, the flag isn’t exactly the IS flag, though it is similar, and its Arabic script translates to “There’s no God except Allah and Muhammad is his prophet,” with a militant connotation. A journalists at 7 News Sydney has counted at 15 hostages through the window.