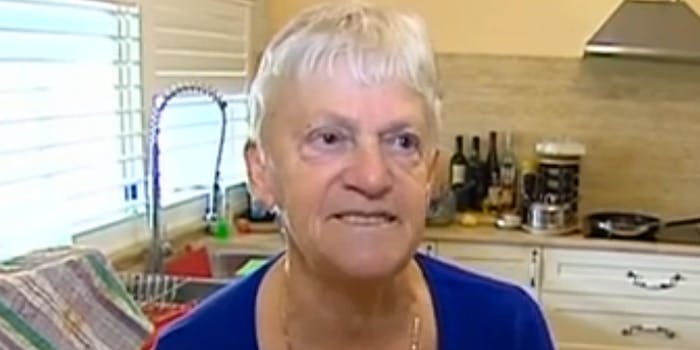 Broke, injured rock-climber tries to sell his mother-in-law on eBay

Everything's for sale, even the wife and kids—and the mother-in-law, no doubt, if you've got a mountain of debt to climb.

Everything’s for sale, even the wife and kids—and the mother-in-law, no doubt, if you’ve got a mountain of debt to climb.

That’s the way things are going in Australia, at least, where one man has put his future mother-in-law up for auction on eBay.

The seller, a nice-looking bloke named Daniel Bush, listed his future mother-in-law on the online auction hub in an effort to recoup some money lost to medical expenses—expenses stemming from a nasty rock-climbing fall that left him with two broken ankles.

The most amazing part about the whole ordeal is that the future mother-in-law first proposed the plan.

Thea Calleja, who “comes with a dog” and requires a single-level home on account of her own wary hip and bum right knee, told Bush to throw her up for auction herself, bucking the notion that mothers-in-law don’t ever want to do anything nice for her their daughters’ significant others.

Unfortunately for Bush, the auction’s not going as swimmingly as planned. With only six days remaining, the crippled one has only raised $56 AU.

Perhaps that’s because terms of the arrangement are neither absolute nor definitive. As Bush told Yahoo! Australia, “You can only have her for seven days.”