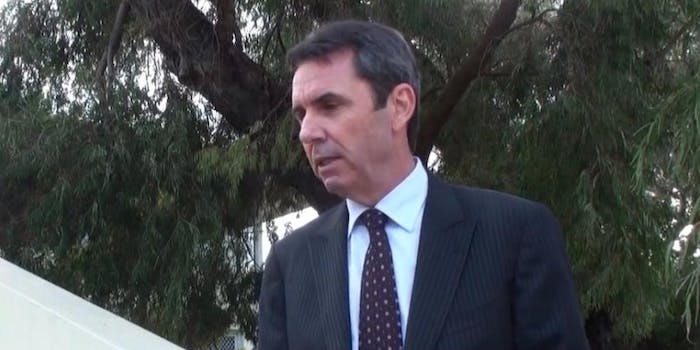 A Facebook prank ends with an apology from a red-faced education minister.

An Australian politician made a public apology after he liked a Facebook photo in which a teen joker sneakily exposed his genitals without realising the boy was doing so.

Peter Collier, minister for education in Western Australia, liked the photo of the then 16-year-old in late 2011. The teen was fully clothed and standing next to an older man, except he gave anyone with a sharp eye a full view of his testicles.

The boy was playing a prank called “sneaky nuts,” popularized by comedian Chris Lilley in his show Angry Boys. The show features a character who wrecks group photos by exposing himself in a subtle way. Think photo-balling instead of photobombing.

Collier was unaware the teen played the joke until a journalist brought it to his attention Thursday.

“This obviously highlights the pitfalls of social media,” he said in a statement reported by the Associated Press. “I apologise if I caused any offense.”

The teen last month bragged on Twitter about fooling Collier, with whom he was Facebook friends. The boy was apparently a member of the Young Liberals, the youth division of Collier’s Liberal party.

Sneaky nuts has caused headaches for others, including a Catholic school in Canada, which had to place stickers over a photo in 1,300 yearbooks when a student played the prank. Even the meme’s creator has seen it backfire on him. Sharing a sneaky nuts photo on Facebook led to a temporary ban from the social network for Lilley.