Thousands sign petition to change the Australian currency to ‘Dollarydoos’

Australians have been stuck with the Australian dollar for a half a century now—not exactly the sexiest name for a currency, especially considering “boomer” and “kanga” were both proposed at some point. But the country may just get another crack at making their money stand out.

That’s because one Thomas Probst, an avowed Australian, has launched a Change.org petition aimed at convincing ministers in Aussie government to switch the nation’s currency to “Dollarydoos,” a term that comes from a 20-year-old episode of The Simpsons. To win a bet with Lisa about the Coriolis effect, Bart calls a boy in Australia (collect) to ask which way the water in his toilet flows—and it ends up costing the kid’s father bigtime.

Here’s the body of Probst’s petition, which makes a sound economic argument about capitalizing on a timeless pop culture reference: 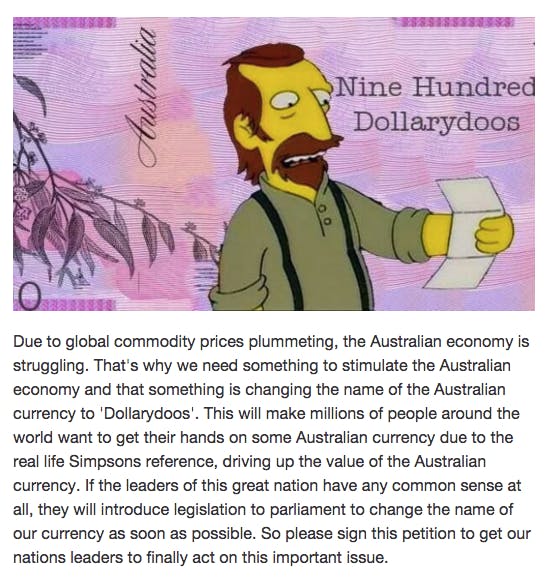 Just about 15,000 people have signed the letter so far, though it’s far from clear how many are actually, you know, Australian. What we do know is that Prime Minister Malcolm Turnbull could well become a hero to Simpsons fans around the world.

Update 10:11am CT, Oct. 17: An earlier version of this article misstated Malcolm Turnbull’s position in Australian government. He is currently Prime Minister of Australia and Federal Member for Wentworth, not the Shadow Minister for Communications.