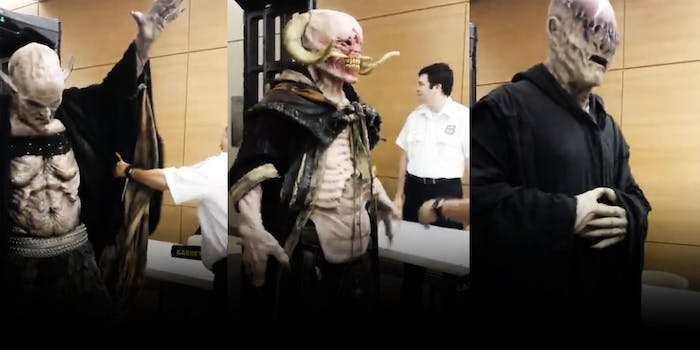 "You never know who may show up to speak... but not before going through security."

The gates of Hell opened beneath Austin, Texas, on Sept. 26—and it turns out demons take their civic duties very seriously.

At a standing-room-only Council meeting on Thursday evening, a video was captured and uploaded to the City’s Facebook page of some particularly unusual Austinites passing through security.

At the meeting, the hot topic on the packed agenda was the legality of ridesharing services like Lyft and Uber. Though regulations to allow their operation within city limits were eventually approved (but have not yet gone into effect), Texans turned out in force to debate the issue for 6 long hours, bearing their loyalties across their chests with branded T-shirts both for and against the taxi platforms.

A lot of these shirts at Austin city council meeting. #liveonKEYE pic.twitter.com/MGVPsxBPxg

A lot of these shirts too at Austin city council meeting. #liveonKEYE pic.twitter.com/dl8efrpeDa

These provocative sartorial statements were upstaged, however by the latest hellspawn to crawl into Austin. Apparently devoid of dangerous weapons, plagues or famine, photos of the Satanic trio have also emerged from the council chamber.

So this is my first #Austin City Council meeting… pic.twitter.com/h3X0sQlLHK

Are the end of days finally here? Should we hide quivering beneath our coffee tables, awaiting the Four Horsemen and their torments and pestilence? Perhaps not. At least one of them appears to be Anthony Paul Gonzalez—an employee at Austin’s House Of Torment haunted house. At least one mystery still remains, however—what do they think about Uber?

Clarification: While Austin City Council did give initial approval for ride-sharing companies to operate within the city, the regulations allowing for their legal operation have not yet gone into effect.