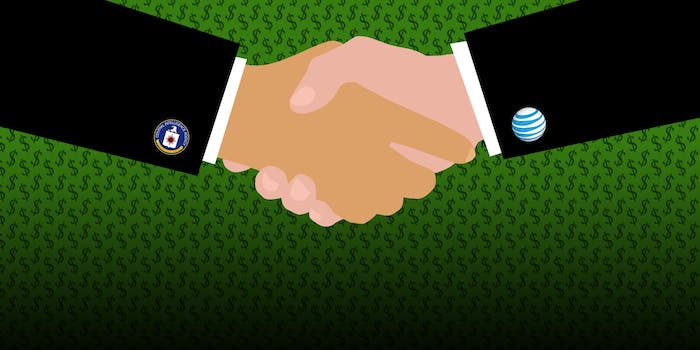 The CIA reportedly pays AT&T $10 million a year to assist in overseas counterterrorism investigations, in an operation that runs independently of the National Security Agency’s own sweeping intelligence gathering operations.

Citing an anonymous government official, the New York Times reports the CIA has been utilizing the telecom company’s vast database of phone records to draw connections in overseas investigations related to national security. Unlike in other intelligence gathering operations, like the NSA’s PRISM, AT&T has apparently entered into this arrangement through a voluntary contract, rather than through subpoenas and court orders. The revelation adds more detail to the public’s understanding of the relationship between government intelligence agencies and tech companies.

The focus of this CIA endeavor is on non-U.S. citizens. The agency is prohibited from spying on American’s domestic activities by law and imposes privacy safeguards. Most of the call data the agency requests relates to communications between foreigners. In cases where the CIA seeks domestic-to-international call data, info pertaining to the domestic half is censored by AT&T (though the CIA may refer suspicious domestic callers to the FBI, which may then obtain a warrant for further investigation).

Though the program is in many ways similar to the PRISM program brought to light by Edward Snowden earlier this year, another security official quoted  by the Times said it makes sense that the CIA would have its own independent program. The official said the agency needs its own rapid access to phone data to assist on-the-ground operatives abroad dealing with “time sensitive threat situations.”

But on-the-record officials with the CIA and AT&T would not confirm the existence of an information-sharing contract.

“The CIA protects the nation and upholds privacy rights of Americans by ensuring that its intelligence collection activities are focused on acquiring foreign intelligence and counterintelligence in accordance with U.S. laws,” said Dean Boyd, an agency spokesman.

A spokesman for AT&T said the company values the privacy of customers, but that its policy is not to comment on questions related to national security.

If true, this revelation adds a new dimension to the nation’s ongoing privacy debate. Since Snowden’s initial leaks in June, the tech companies that have provided government intelligence agencies with communications data have claimed to do so only by legal compulsion. But the arrangement between AT&T and the CIA would indicate that sometimes private companies are willing participants.

This is not AT&T’s only secretive relationship to the intelligence-gathering community. It helped facilitate a warrantless wiretapping program under President George W. Bush, and it was one of three phone companies to embed employs with the FBI between 2003 and 2007 for the purpose of quickly analyzing call data.

But it’s not just AT&T subscribers who may be susceptible to CIA snooping under this program. As Matt Blaze points out on Twitter, calls carried over the AT&T network still end up in their pool of data. Blaze was one of many to voice their concern over AT&T’s willingness to give up private user information in exchange for money.

$10M/yr? I’d almost be less bothered if AT&T were at least selling out for a better price.

For AT&T, helping the #CIA spy on people is just business as usual: http://t.co/VjJJUjixpe #StopWatchingUs