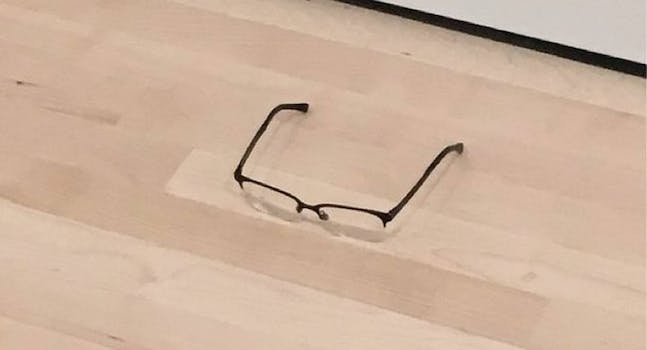 Pranksters left a pair of glasses on the floor of a gallery, and people thought it was art

What is art, and what is LMAO?

For decades, artists have been testing the line between “art” and “just stuff,” and a couple of pranksters proved recently that the question remains unsettled. In a prank—or a work of art?—descended directly from Duchamp and his “readymades,” they left an ordinary pair of glasses on a gallery floor.

And instead of ignoring them, visitors paused to stare and consider them the way one might the “Mona Lisa.”

The results, according to perpetrators @tjcruda and @k_vinnnn, were LMAO.

LMAO WE PUT GLASSES ON THE FLOOR AT AN ART GALLERY AND… pic.twitter.com/7TYoHPtjP8

People stopped, knelt down to look, and even took photos of the glasses, despite the lack of any posted information about the “piece.” Their confusion is hilarious, but it’s not really their fault—it’s probably 5 percent gullibility and 95 percent insecurity about the setting and about the “right” way to observe art.

Much has been written about the self-selecting few who go to museums and others who consciously avoid engaging with art—even deciding to feign boredom—to avoid feeling judged or rejected at a gallery. And much has also been written about how such venues might encourage visitors—especially those who didn’t grow up going to see art—to participate in the discourse.

These two teens and their prank, which received internet hype on BuzzFeed and Mashable and even appeared on Twitter Moments, may have brought more public attention to these questions than all the academic writing on the subject combined.

While the academy is eating its own tail, a couple of dudes just lay down a pair of glasses and ask, “What is art? How should we view it? How should we talk about it? Is there a ‘right way?’ LMAO?”

And here’s where this shit gets meta: how should we think about their prank? Does its explicit transgression and non-artness in fact make it art? Is it meant to comment on the works around it, the institution, the art establishment, the audience, all of the above, or simply LMAO?

It is for you to decide. That’s how art works!