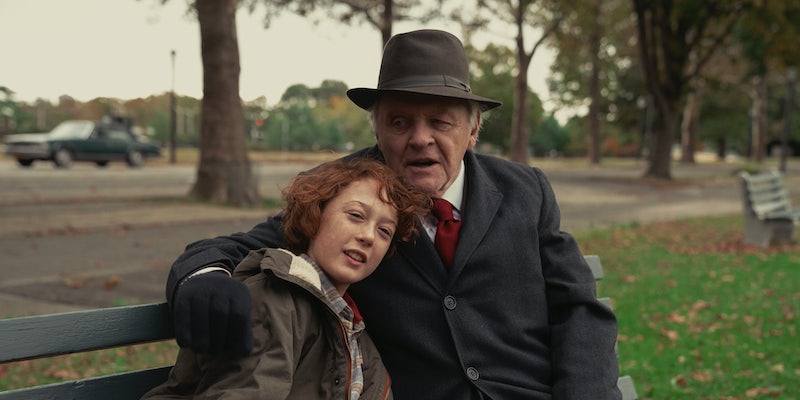 It's James Gray's most personal film to date.

Directors’ semi-autobiographical look-backs at monumental moments in their lives—personal, political, or historical—are all the rage right now. You had Alfonso Cuarón’s Roma in 2018, Kenneth Branagh’s Belfast in 2021, and Joanna Hogg’s The Souvenir and The Souvenir Part II in 2019 and 2021 respectively. In 2022 alone, we’re getting Steven Spielberg’s The Fabelmans, Alejandro Iñárritu’s Bardo, and Charlotte Wells’ Aftersun. (The Eternal Daughter, Hogg’s latest film that doesn’t yet have a release date, could be looped into the fold as it follows older iterations of the characters from the Souvenir films.)

Release Date: Oct. 28, 2022
Director: James Gray
Release: Theatrical
Writer-director James Gray’s semiautobiographical examination of his childhood in 1980 Queens gives an introspective (and sometimes frustrating) view into the steep cost of the American dream and the compromises one must make to achieve a version of it.

Armageddon Time, the latest film from director James Gray (Ad Astra), is very much in that vein. Carried by some affecting performances, it attempts to put the kinds of compromises that one family makes to exist in a country where they feel like their acceptance in it is conditional under a microscope. But as Gray turns the camera inward, other aspects of this tale of introspection and regret feel vastly underwritten.

When looking back at your history, you might be tempted to make certain aspects more palatable, particularly when shaping your cinematic counterpart. But it’s one that Gray doesn’t take. Paul Graff (Banks Repeta), the Gray stand-in, is sensitive but also selfish and self-absorbed. Early on, he refuses to eat his mother Esther’s (Anne Hathaway) cooking, leaves the table, and calls the nearby Chinese restaurant to place an order of dumplings; from the arguments and exasperation that ensues, you get the impression it’s far from the first time Paul’s pulled this move. He’s a talented artist and wants to make a career out of it, but Esther dismisses it as nothing more than a hobby. His older brother Ted (Ryan Sell) pushes his buttons, and his father Irving (Jeremy Strong) envisions a very different future for his sons and will do what he can to ensure it, but he also has a volatile temper.

The Graffs are wealthy enough that day-to-day costs are of little concern—Paul is seemingly able to take money from his mother’s jewelry box to help a classmate pay for a trip to the Guggenheim without punishment—and Esther’s role as the PTA president (she also wants to run for school board) makes him believe that she has power over the entire school. But the bigger items, such as tuition at the prestigious Kew-Forest School, are only possible for Ted thanks to some assistance from his grandparents.

For Paul, the bright spot in his life is his grandfather Aaron (the always reliable Anthony Hopkins), who nurtures his interests—he offers kindness in places his parents might not—while trying to give him insight into how the world works. And it also comes with a budding friendship with Johnny (Jaylin Webb), a classmate in his 6th-grade class and one of the few Black boys at his public school. They both are natural class clowns who enjoy making their classmates laugh (especially at the expense of their teacher), but Paul quickly witnesses the vastly different ways in which he is punished compared to Johnny, who’s been held back before, is regularly attacked with microaggressions, and Johnny is blamed for every outburst in class, even when he had nothing to do with it. In portraying some of those earlier, carefree hijinks, Repeta and Webb do some wonderful work.

The contradictions only build, some of which Gray is able to depict with sharp precision, particularly when he’s wrestling with the limits of how far assimilation can take the Graffs. Paul’s family seems like they’re liberal, so his eventual arrival at Kew-Forest—from his classmates who casually hurl racist slurs to the adults who make him feel othered because of his Jewish heritage—is jarring: How is it that he’s the only one who seems to see the hypocrisy in watching the Trumps speeches about how they earned everything they’ve strived for when they’ve had everything handed to them on a golden platter?

As Irving and Esther push for a future where their children might have a better future, Paul is reminded by his grandfather of what his ancestors faced before fleeing Ukraine. And even the idea that Paul’s family is more progressive is suspect: When Johnny and Paul get into trouble, Esther forbids Paul from seeing Johnny again, all but saying it’s because of his skin color.

Far less successful is Gray’s attempt to wrestle with Paul’s privilege through his friendship with Johnny and how helpless Paul feels to circumvent any of the film’s events. We know that Johnny dreams of becoming an astronaut, something a Black passerby on the subway scoffs at because he can’t imagine a world where NASA hires someone who looks like them. But most of our view into who Johnny is comes from Paul’s point of view, so we rarely get to see the character outside of that or find out much of who he is; it makes Johnny sometimes feel more like a cipher than a character.

Gray is trying to pull off a delicate balancing act. It doesn’t quite work—although he’s certainly not shy in showcasing his own complicity—but it still offers something fascinating along the way.

Armageddon Time is in theaters nationwide on Nov. 4.