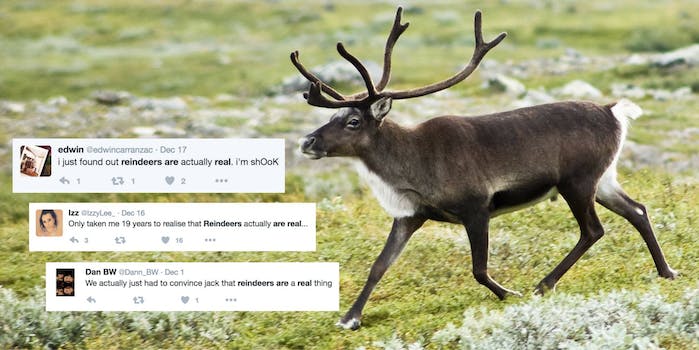 People are just now finding out that reindeer are real

This isn't a debate, you guys.

You know Dasher, and Dancer, and Prancer, and Vixen—Comet, and Cupid, and Donner, and Blitzen. But can you recall, the most plausible reindeer of all?

In North America, reindeer are commonly referred to as caribou, and reside in Alaska and Canada, with no populations in the continental U.S. This probably explains why many Twitter folks are just now realizing that reindeer are, in fact, real.

Who thinks they're stupid? Yeah?… I just found out reindeer are real. Pretty sure I'm the stupid one.

This random Twitter search comes courtesy of writer Aaron Cohen in a tweet from nearly half a decade ago.

If you look through this Twitter search, you can see all the people just realizing reindeers are real. http://t.co/iXDCHNhv

Yes, yes, the plural of reindeer is actually reindeer, though Dictionary.com finds reindeers permissible for the plural.

Though the original tweet is almost four years old to the day, much has remained the same on the topic of “Reindeer: Fact or Fiction?” Another year, another holiday season during which young and old alike learn, or more likely are reminded, that reindeer and elves do not share the property of mythical creature.

I canny get over how reindeers are real, I thought they were a mythical creature

I actually can’t get my head around the fact that reindeers are real????

I still can’t believe reindeers are real;always presumed they were mythical like unicorns or dragons

For the record, this is not an opinion that is up for debate. The reality of reindeer is a cold, hard fact, despite what any Twitter pollsters allege.

To settle a debate, are reindeers real?

So we can all jump on the “shook” bandwagon with relative ease, but we have somehow taken years to figure this whole reindeer thing out?

i just found out reindeers are actually real. i’m shOoK

WAIT IM SO SHOOK I JUST FOUND OUT REINDEERS ARE REAL

Perhaps unexplainable for the amount of technology we have in the second decade of the 21st century, it would appear a handful of these reindeer truthers are young adults.

Out of my 17 years of existence, today I found out that reindeer are real

How have I gone 19 years without knowing reindeers are real

Honestly, this is a simple Google search, folks. In case you’re mistaking the Twitter text entry field for a search engine, here is the link: just click this, I beg of you.

Or please, somebody just build us a Twitter bot that responds to the phrase “are reindeer(s) real,” and tweet us our of our misery, already.

That’s it—Santa is getting y’all Encyclopedia Britannica online subscriptions for Christmas. Every single last damn one of you.