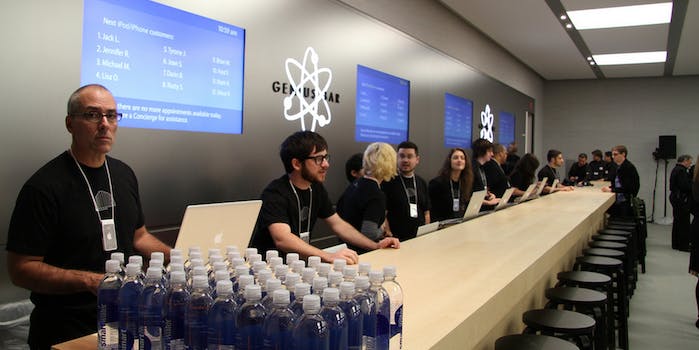 An Apple employee says he was barred from promotion after being told 'black employees don’t reach management in this market.'

Tech giant Apple is fending off allegations of racial discrimination from a long-time retail employee who says he was consistently denied a promotion and told by a manager that black employees have no chance of making it into management at his store.

Back in December, Andrew Dupree, 31, filed a complaint with the Florida Commission on Human Relations, alleging that a manager at the Orlando store where he works has continually denied him promotion to management based on the color of his skin. Dupree, who is black, said he tried bringing up the issue with senior officials at the company – including CEO Tim Cook – but that his complaints fell on deaf years.

“I was not given a job, despite being told that I was going to be given a transfer, because of one manager’s racism,” Dupree told Radar Online. “I blew the horn as loud as humanly possible and they did nothing. I want the focus to be on Tim Cook, Apple and their failure to address the racism in the company. Racism that they knew about.”

Dupree has worked for Apple for four years. During most of that time he has worked for an Orlando Apple store where allegedly one of the managers routinely made racially insensitive comments that Dupree said were “not related to work but nonetheless hurtful.”

Eventually, Dupree obtained a transfer to work in Sydney, Australia for about a year. During his time in Australia, Dupree says he showed his worth as a potential manager by expanding the store’s Easy Pay Program (a system by which customers pay for merchandise with their existing Apple products). The store had a 1.6 percent success rate with Easy Pay when Dupree arrived and by the time he left that number had risen to 14 percent under his guidance.

Late last year, Dupree was negotiating a transfer back to the Orlando store, expecting a promotion to management based on his experience. However, he says he was denied a promotion by the same Orlando manager. In his formal complaint, filed Dec. 18, 2013, he told the Commission on Human Rights that his manager seemed to think black employees didn’t have a place in management at her store:

When I was in the Orlando Store under the Supervision of XXXXX, Senior Manager, she had make a statement prior to me transferring to Australia that Blacks in the Orlando location don’t have a chance to make it to management.

I did not express my concern to management at that time because I was transferring to Australia.

I believe that my upward ability at the Orlando Store is being hindered by XXXXX’s intention to discriminate against Blacks who are qualified to a hold a management position.

I believe that I am a victim of discrimination because of my Race, Black in violation of the Title VII of the Civil Rights Act of 1964, as amended.

Prior to filing the complaint with Florida officials, Dupree sought to air his grievances with higher-ups at Apple. He personally emailed Cook, but was eventually reached out to by two members of Apple’s human resources department who scheduled a conference call back in October. There, Dupree aired many of the same complaints about his manager’s attitude, including the comment that “black employees don’t reach management in this market.”

When Dupree was once again denied a management position in December, that’s when he chose to approach outside authorities. His complaint is now being investigated by the Equal Employment Opportunity Commission. On May 19, Apple filed its response with the EEOC, the details of which remain confidential with the company refusing to comment publicly on the case.

Dupree said he is waiting for the result of the EEOC investigation before deciding whether or not he’ll take further legal action against the company.