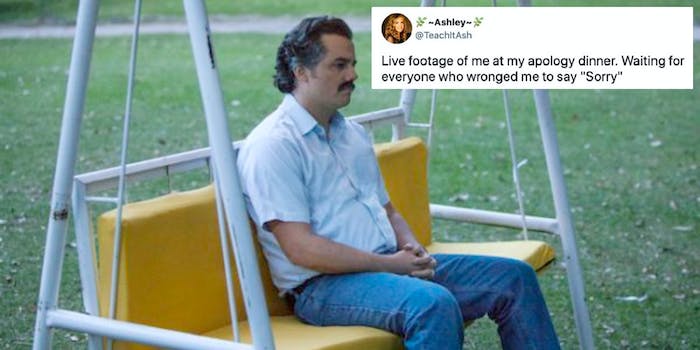 ‘This sounds like something I would love to attend at least once in my life.'

Many families and cultures have wholly unique traditions that may seem strange to outsiders but somehow seem perfectly normal in the context of our own households. That’s the only way we can explain the concept of an “Apology Dinner,” which began trending online this week purely due to the fact that people are perplexed by it.

It all started on Wednesday when a Reddit user posted a since-removed question to the website’s popular r/AmITheAsshole (AITA) subreddit, asking if they were “the asshole” for “arranging potluck for (their) sister’s Apology Dinner.

The TL;DR here is that the original poster’s mother decided to host the said Apology Dinner for her older sister, for an initially undisclosed reason, on the contingency that she would prepare the food. However, as extended family members learned of the dinner and demanded an invite, it became more of a potluck-style affair. (Jeez, you can’t blame OP for not having the capacity to feed that many people!)

Unfortunately, that only further incensed the sister, hence, the AITA request.

Now, it’s not unusual for these posts to go viral, as people often have visceral reactions to either one party being extremely guilty of being an asshole or the other party for having extremely unrealistic expectations. Though, in this instance, everyone just wanted to know what the hell an Apology Dinner is in the first place.

People had serious questions. And the fact that the OP went out of her way to explain what a potluck was but not an Apology Dinner only added an additional layer of confusion.

“I like the way OP explained what a potluck was but acted as if an apology dinner was a universal thing,” tweeted one user.

“Why does OP explain what a potluck is but not explain what an ‘apology dinner’ is and keep repeating it like it’s a familiar cultural institution relatable to most people,” offered another. “OH NO, what if I’m the one out of touch?!”

Others just wanted the dirt on what exactly the mother was apologizing for.

But as the general tone shifted from confusion to amusement, others mostly reacted with jokes and memes.

And of course, it was the perfect time to break out the DJ Khaled standing up reaction meme.

For what it’s worth, the OP later sort of explained what an Apology Dinner was in the comments. “It’s not a party, but a dinner,” she wrote. “The reason for a dinner is so they can not only apologize, but hash things out.”

She added, quite reasonably, that it’s more difficult to sweep things under the rug or rush through the apology when, you know, there’s a whole meal to be eaten. The OP also alluded to it being a cultural thing but did not specify where her family is from.

To solve another mystery, though, the mother apparently attempted to break up the sister and her boyfriend over the fact that he’s a different ethnicity. Honestly, this sounds as good a reason for an Apology Dinner as any. Let’s hope the sister got whatever closure she was looking for and wasn’t too thrown off by the potluck aspect. Who doesn’t love a good potluck anyway?