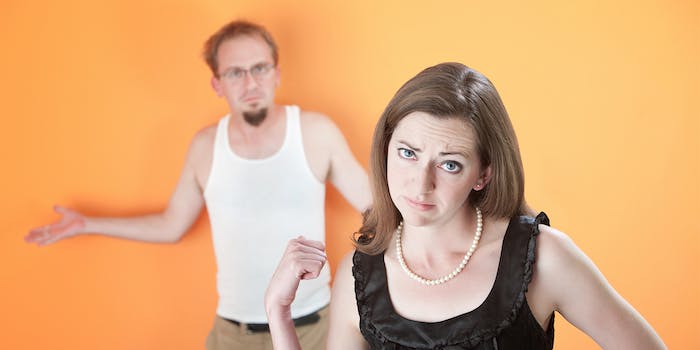 You can guess how this went.

A Redditor asked if he was the “asshole” for accusing his girlfriend of dressing up for a Zoom meeting to impress her male coworker—and received swift, unflinching confirmation that, indeed, he was.

The post appears to have been made by u/RedThrowaway1994. Moderators from the r/AmITheAsshole subreddit removed it after it received over 14,000 upvotes, but not before @AITA_reddit tweeted it. The details are almost too good to be true—and yet, it’s hard to imagine anybody writing fiction this outrageous.

Some background: OP and his girlfriend live together and keep different schedules. She’s got a “boring desk job” that makes nearly six figures, while he keeps weird hours to write music and build his burgeoning TikTok career. (Here we go.) His parents help him cover expenses, but don’t worry, they don’t pay his rent! His girlfriend does that with her boring desk job salary.

The drama started when OP’s girlfriend took a morning Zoom meeting—as people with regular jobs are wont to do—on the other side of their apartment. This frustrated OP, who had stayed up late for another wild night on Discord with the boys. He even asked his girlfriend not to wake him up before noon—very prudent.

So you can imagine OP’s frustration when his girlfriend woke him up by joining a Zoom meeting for work with her female boss and male coworker. At that point, OP noticed his girlfriend was wearing “one of her nicest business outfits and wearing full makeup which is not her usual getup.” This “triggered” him even more.

The reason, he surmised, had to be to impress her male coworker on the call. OP accused his girlfriend of “emotional cheating,” despite her claims that she’s just doing her job—the job that pays OP’s rent.

“Honestly even if it was for the boss, she’s using a superficial method to get ahead which doesn’t seem very dignified to me,” OP wrote. “I’m guessing she knows I’m partly right but she’s not acting like it now.”

As the deluge of “you’re the asshole” responses rolled in, OP felt the need to clarify his financial situation.

“I promised my girlfriend to give the TikTok career no more than a year and if it doesn’t work out, I’d find a more stable job,” he wrote. “Also I share the food I buy with her and when we go out to dinner I pick up the tab half of the time.”

Remarkably, this did not bring OP the vindication he sought. After several more rounds of downvotes and updates, he waved the white flag: “I’m done with Reddit for the day. I suggest you all get a life.”

Plenty of commenters were baffled by OP’s obliviousness.

“He has never had to graft for anything in his life and as a result is just completely unaware about the value of literally anything,” u/triton100 wrote. “His gf needs to dump his ass and soon. He must be really good looking or something.”

Other people picked on his decision to pursue TikTok as a career path.

“I just got as far as babyman is annoyed by gf’s boring job that pays his bills while he launches his TikTok career and I already hate him,” Twitter user @hoooliaaaa replied.

Many commenters, however, concluded that the post had to be a troll job. The failed TikTok career, Discord hangouts, sleeping till noon, accusations of emotional cheating, strategic use of the word “triggered”—it all seemed too perfectly awful to be real.

“This is a fake and i refuse to hear otherwise, thanks. (because if this is real, my brain will leak out my ears),” @keyrodi wrote.

That said, if the post is fake, then OP’s prospects as a writer are much better than his phony TikTok prospects.

“If it is then I wish them a long and successful career because their work is outstanding,” @MelangeMost wrote.