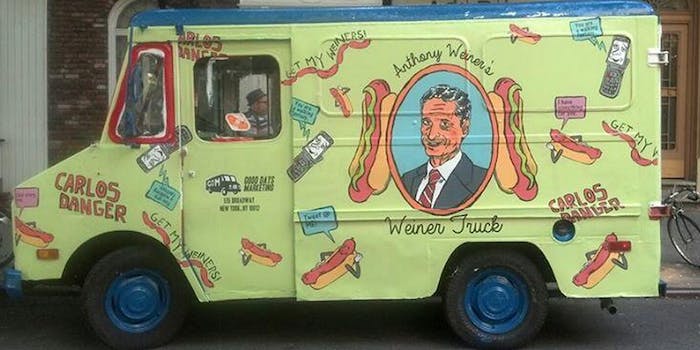 The folks at New York City’s Good Days Marketing are not content to let mayoral candidate Anthony Weiner fall off the radar.

Good Days teamed up with Unruly Heir, their clothing company, to bring you this mobile tribute. The truck is painted with cartoon images of hot dogs and cellphones saying suggestive things, and is tagged with Weiner’s alter ego, Carlos Danger. (Interestingly, when I visited the Unruly Heir website this morning, I was briefly taken to a site hawking Viagra and Levitra.)

Further, the truck is set up so you can tweet at Anthony Weiner, then receive a free hot dog, sort of a modern-day Pavlovian experiment. Unruly Heir cofounder Joey Goodwin states they’re not officially affiliated with his campaign. Good Days is just really good at latching on to fads, like cronuts.